Here we go again.  Six more plants blooming on a Saturday.  When you are finished here, get on over to The Propagator’s site for more Six on Saturday. 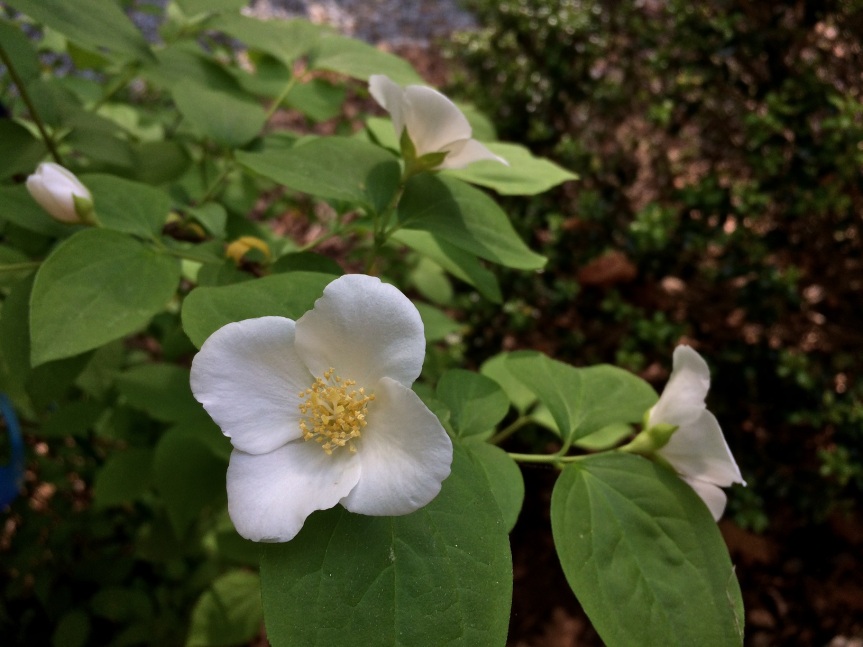 I grew this pretty native shrub from seed obtained from the NC Botanical Garden’s annual members’ seed list.  It seems to be primarily a species of the Appalachians, but the USDA Natural Resources Conservation Service has records for Orange and Randolph Counties in the NC piedmont. 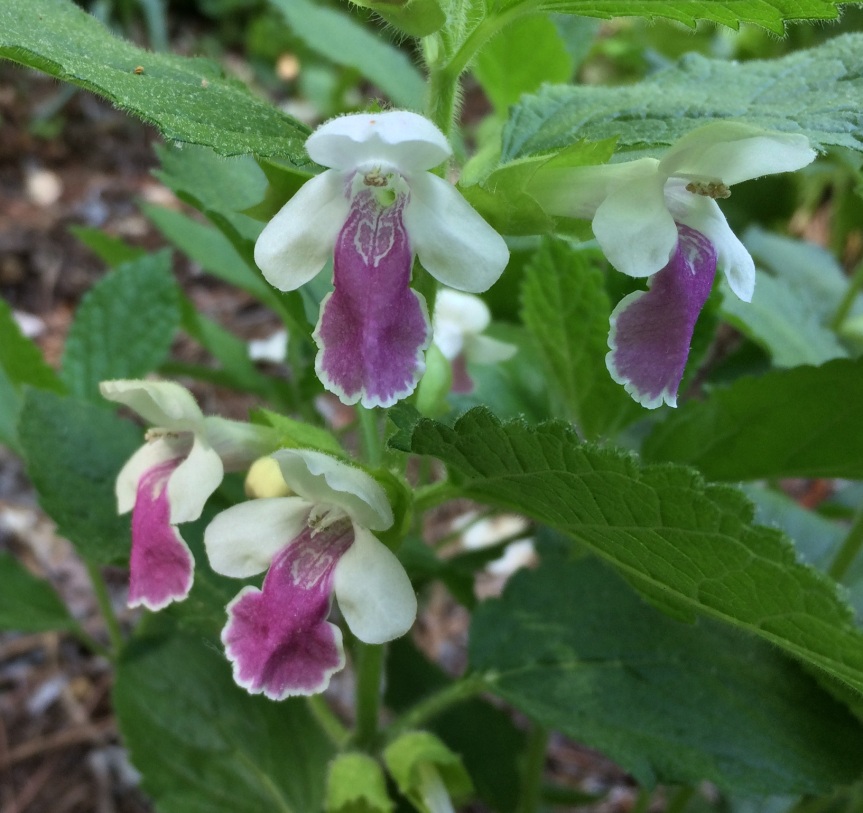 I bought this European perennial partly for its pretty flowers, but mostly for its common name.  It’s Latin name suggests that it is popular with bees, but I haven’t been able to track down the origin of “bastard balm”.  For the first two years, it produced a fairly sad little flowerless rosette, and I wondered if it didn’t like our climate or soil.  But, this year it has grown three flowering stems that are about a foot tall.

As with many other Japanese species, Iris tectorum loves our climate.   After the flowers fade, the foliage remains neat and tidy throughout the summer and autumn, dying back only in midwinter.  I started with a single plant ten years ago , but I scatter seed every autumn.  Now there are scattered clumps and large drifts throughout the garden.  Some of the older clumps suffer from iris borers in late summer, but there are always enough seedlings to replace them.  I think it might be nice to get a few of the white form to intersperse among the typical lavender flowers, but the whites have suddenly become hard to find at local nurseries.

4.  Arisaema triphyllum (jack in the pulpit) 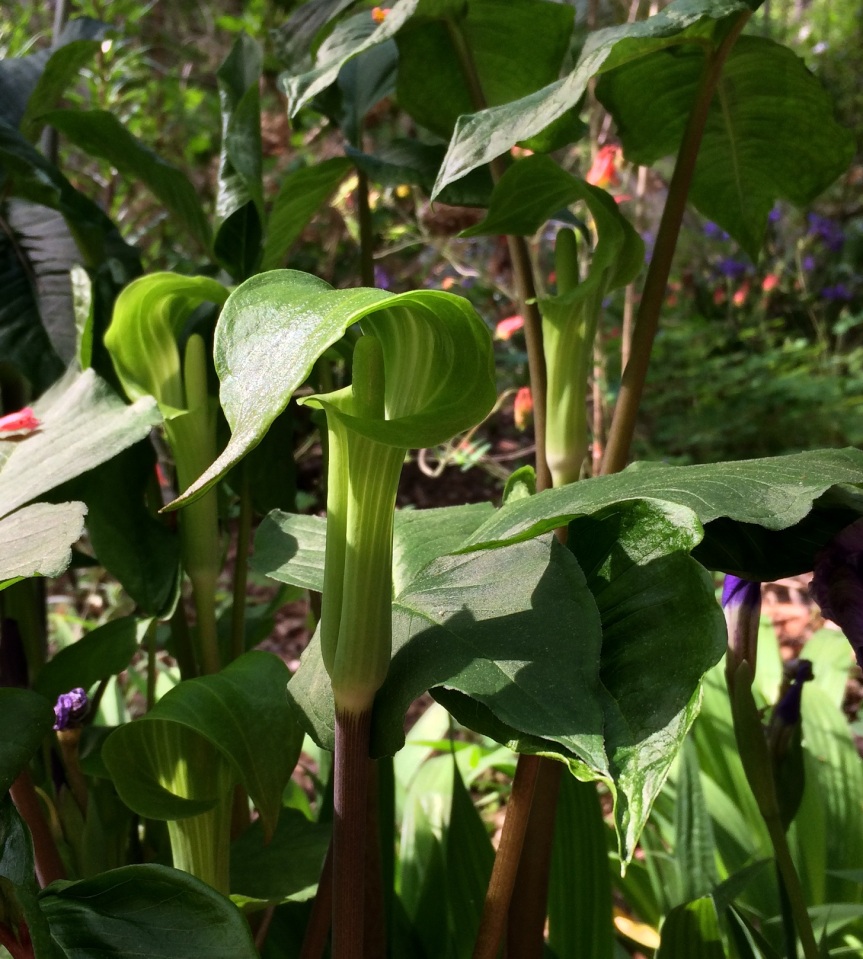 This is another plant that is slowly spreading through the garden.  I started my garden population from seed of local wild plants, but at this point I’m on the third or fourth generation of cultivated plants.  A. triphyllum isn’t as bizarre as some of the Asian Arisaema species, but I like our little native. 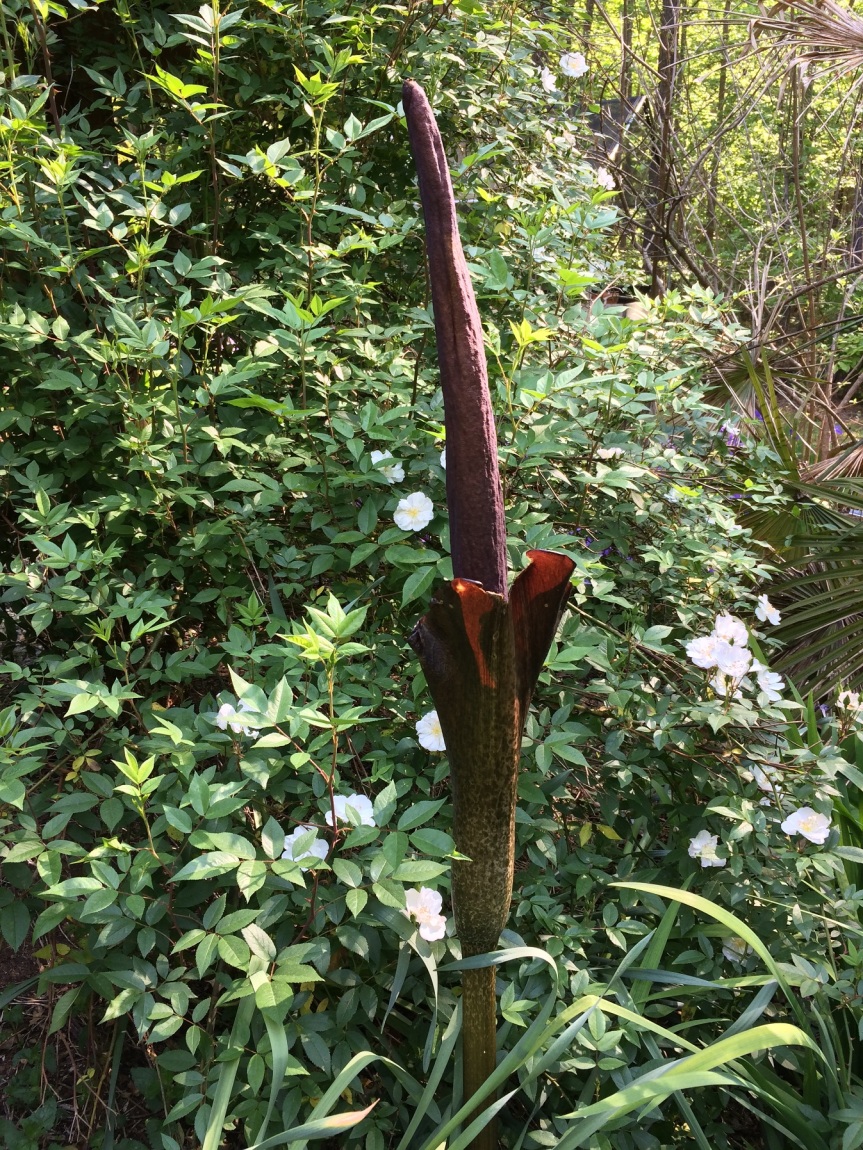 Hey, who planted this stinking aroid so close to the house?  And right next to the beautifully fragrant Persian musk rose, too.  Oh, yeah, it was me.

There are three flowering this year.  The burying beetles and blow flies are so pleased

Fresh young pitchers of one of our native carnivorous plants emerging from my bog garden which is in desperate need of a renovation.