This evening, as I was wondering around the garden trying to decide where to plant a pot of Hippeastrum bulbs, I noticed Penelope the female box turtle in a flower bed at the edge of the woods.  She was digging a nest!

Almost three hours later, she has filled in the hole but is still tamping down the soil and pushing things around on the surface.  I plan to stay up until she moves on, and then I’ll cover the nest with a metal cage to protect it from raccoons/opossums/skunks.

When we saw her walking across the lawn yesterday, we didn’t realize she was an expectant mother—though that might explain why she ate her strawberry with such gusto. 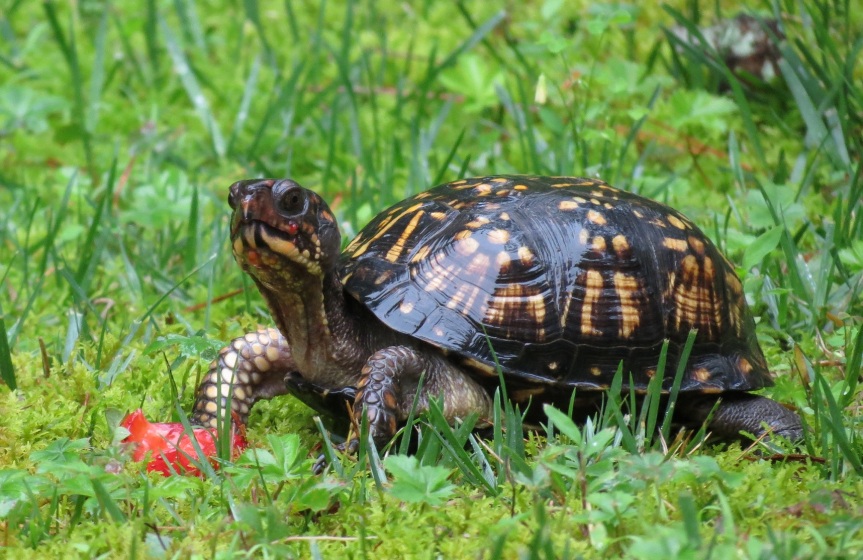 As further evidence that box turtles are successfully breeding in the garden, here’s a juvenile that my wife discovered while she was weeding yesterday.

I am so pleased that our efforts to build an interesting and healthy landscape have created good habitat for the boxies.

I assumed that this tiny rough green snake was a recent hatchling, but according to Reptiles of North Carolina [1], most clutches are laid in June or July and hatch in August or September.  It’s hard to believe that something so small could survive the rigors of last winter.

It seemed to like this azalea and spent most of the afternoon in its branches, retreating to the center of the bush when I approached too close, and climbing to the tallest twigs when I moved away.

The weather is warm and humid.  The first fireflies of the season have appeared.  The solitary adult hummingbirds who have been visiting the feeders since early April have been joined by squadrons of less colorful birds, presumably recently fledged juveniles. On the basis of all this evidence, I declare summer.

This week, flowering perennials outnumber bulbs in the garden.  I’ll start this Six on Saturday with one of my favorite native wildflowers. 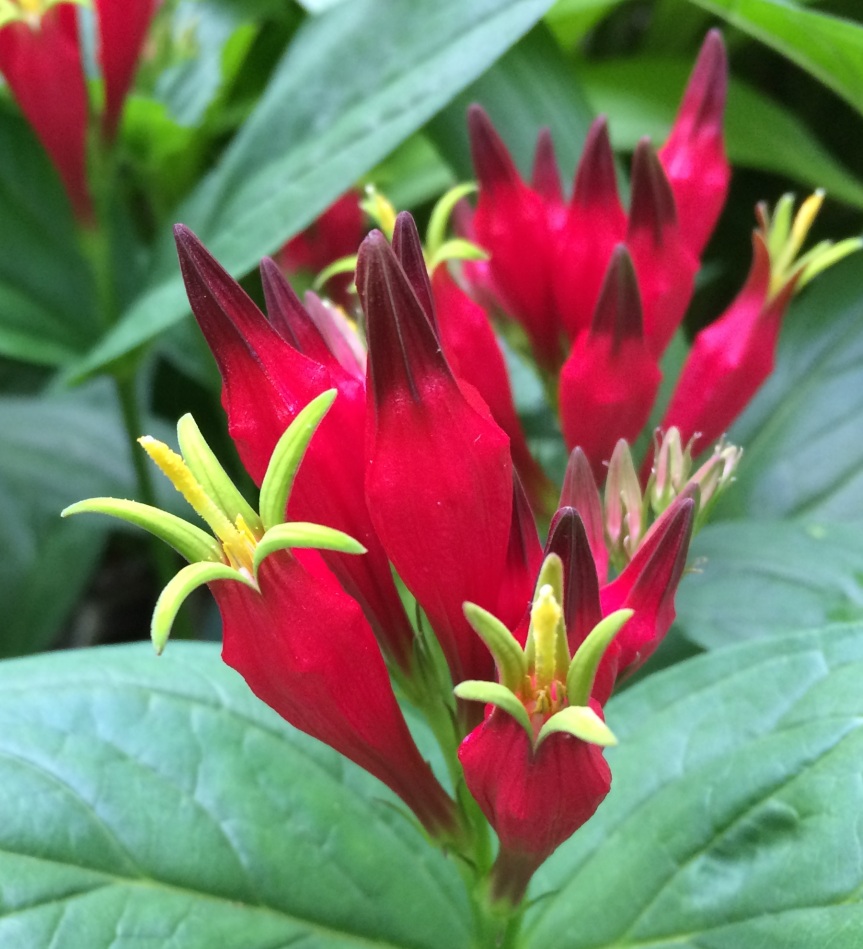 The hummingbirds agree that this is one very fine flower.  S. marilandica is native to the southeastern U.S. and the Mississippi valley as far north as southern Illinois.  The USDA Natural Resources Conservation Service indicates that it is native to North Carolina but does not have any County-level locality data. [Update:  If I would just read my own old blog posts, I’d learn that S. marilandica is recorded from Macon and Cherokee Counties.  And also that I tend to repeat myself.] 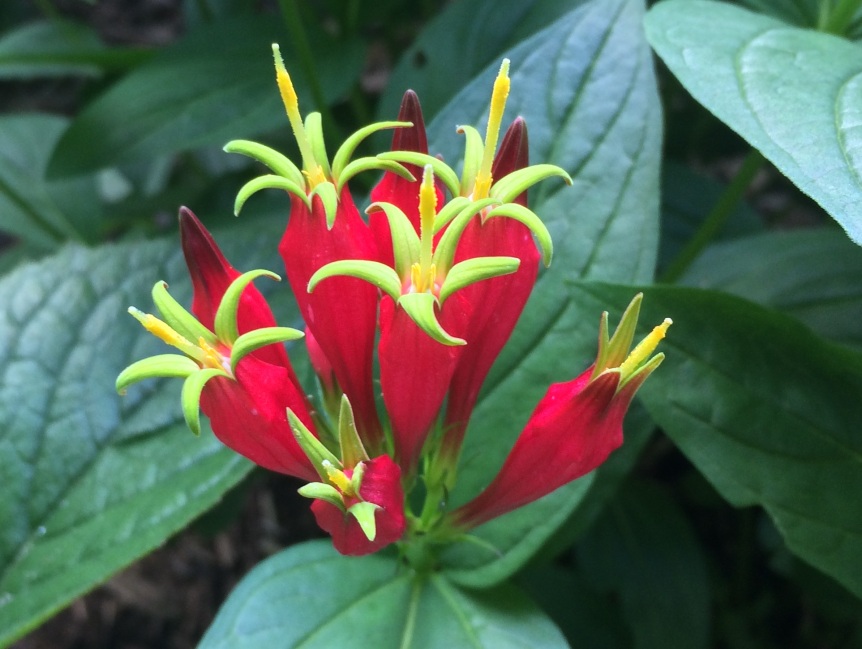 In my garden, S. marilandica grows and blooms in deep shade and nearly full sun, but the best clumps grow where they get sun in the morning and dappled shade in the afternoon.  In my experience, two genetically distinct plants (not divisions of the same clone) are required to set seed, but as long as that requirement is met, no additional effort is required of the gardener.  The hummingbirds are happy to pollinate the flowers.  Seed is difficult to collect, because the ripe capsules split open explosively, propelling the seed some distance from the mother plant.  I find it easiest to wait for volunteer seedlings to sprout, and then transplant the seedlings to new locations.

My plants vary somewhat in the color of the flowers.  Some clones have greenish-yellow tepals on a purplish red tube, while others have bright yellow tepals on an orange-red tube.  As you can see, something about the intense red color makes my digital camera want to shift the color balance of everything else towards the blue end of the spectrum 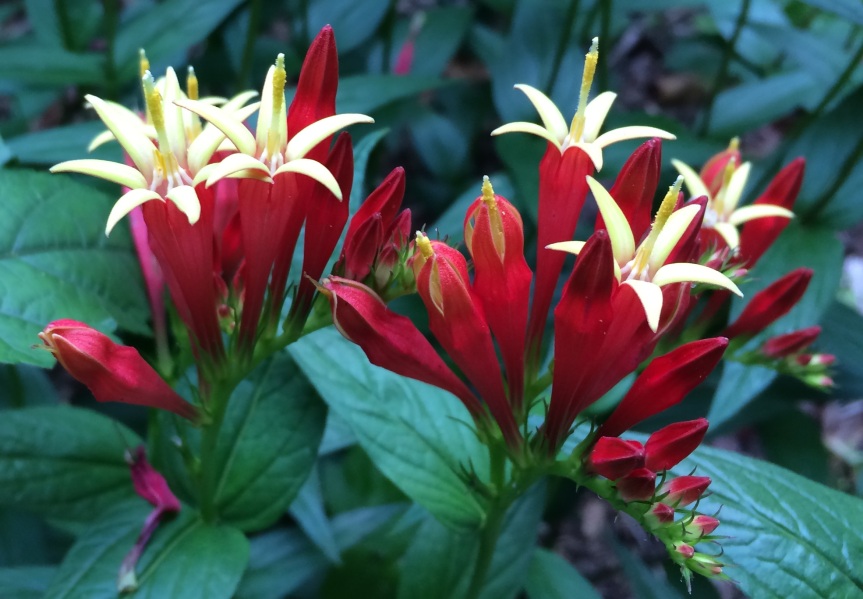 I think my garden is probably a little too warm for this hybrid bellflower.  It doesn’t bloom every year, wilts in the hot sun, and looks ratty by mid summer.  But when it does bloom…Wow!  The deep purple flowers are the size of hen’s eggs.

Campanula can be invasive, but this plant seems quite civilized.  It forms a slowly spreading clump, and the shallow rooted plantlets have been easy to remove if they spread too far.

Thermopsis villosa is native to the western mountain counties of North Carolina, but it grows very well here in the piedmont.  Its only flaw is that the stems sometimes flop over, particularly when the flowers are replaced by heavy seed pods.

Louisiana irises are generally wetland plants, but this hybrid is growing in well-drained clay that is wet in winter but can become almost bone dry in late summer.  Starting from a couple of dessicated rhizomes in a bag from WalMart about six years ago, it has spread into two large clumps with dozens of inflorescences.  The first flowers open just as the surrounding Iris tectorum finish their blooming period.  Perfect.

Another “more-or-less-native” that is recorded from half a dozen western North Carolina counties.  The clone “Husker Red” (with reddish foliage, of course) is very common in the horticultural trade, but these plants that I grew from seed have green foliage.

Lilium ‘Claude Shride’ is a common offering from bulb vendors, and I planted half a dozen bulbs last autumn.  I really like the dark, glossy flowers and the fact that it stands up straight without staking.  L. martagon is a European plant, so I’m not sure if it will tolerate the heat of summer and persist in the garden long-term. Time will tell.

That’s some of what’s blooming in my corner of the NC piedmont today.  To find out what’s blooming elsewhere in the US, the UK, Canada, Australia, and anywhere else garden bloggers are participating in Six on Saturday, head over to The Propagator.

The largest of a batch of seed-grown Crinum bulbispermum ‘Jumbo’ is finally blooming, five years after the seed germinated.  I suspect it would have bloomed earlier if it were growing in more fertile soil, but it was worth the wait.  According to the Pacific Bulb Society Wiki, ‘Jumbo’ is a seed strain developed by the late L.S. Hannibal, who selectively bred C. bulbispermum to obtain plants with larger flowers, better color, and inflorescences that don’t flop.  My seedling has flowers that open with a deep pink flush at the base of the petals and darken as they age until they are almost red.  The 20-inch tall (51 cm) inflorescence remained upright without staking, unlike some of the other crinums I grow.

C. bulbispermum is reputed to be the most cold hardy of the South African crinums, with numerous reports of it surviving in Zones 5/6.  In my garden, most crinum foliage turns to mush at a couple of degrees below freezing, but the 3-foot long (90 cm) leaves of C. bulbispermum survive down to near 20 F (or possibly colder) and start growing again early in spring, long before the other crinums poke their noses above the mulch. 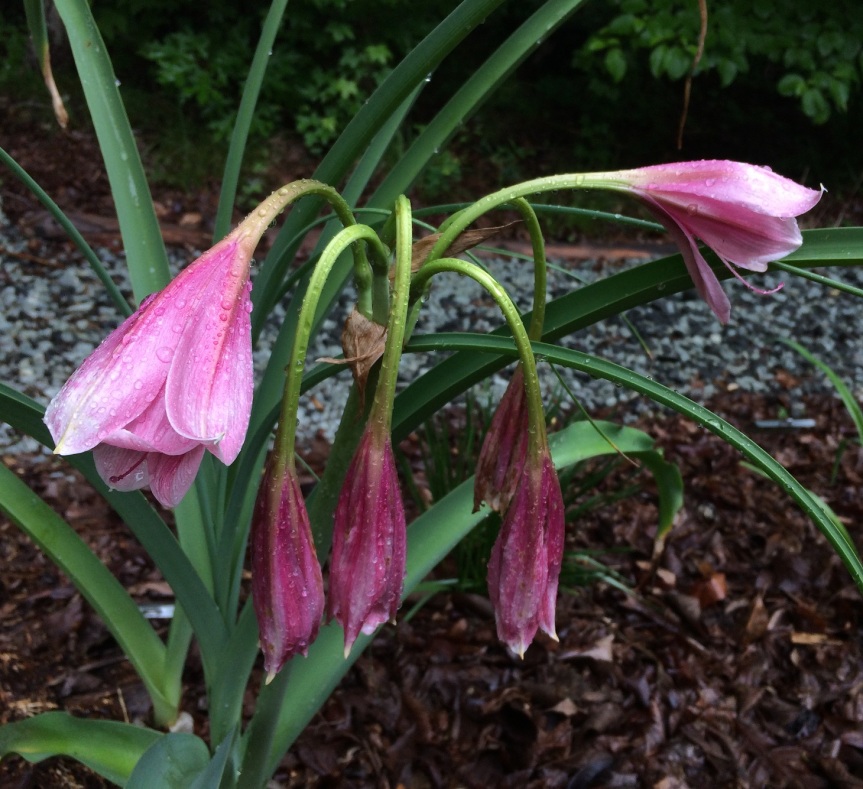 Last weekend, the weather shifted from fairly cool spring to full-on summer, with highs around 90-93 F (~32-34 C) and high humidity.  Over the past few days, the temperature has moderated, but only because tropical air streaming up from the Gulf of Mexico has brought frequent showers and thunderstorms.

Since I missed last week’s Six on Saturday (because I was attending Montrose Garden’s spring open-house and eldest offspring’s last track meet of the season), this six includes photos taken over the past ten days.  Oldest photos are first.

There are a few wild fringe trees in the woods nearby, but I planted this specimen beside the path leading to the front door.  It’s a male tree, so its flowers aren’t as showy as a female’s, but it doesn’t drop fruit on the path in autumn. [Correction:  The internet says I was mistaken.  It’s the male trees that have more impressive flowers.]

I recently read that the invasive emerald ash borer has started attacking C. virginicus, so we may have limited time to enjoy this tree.

This species is often labeled Nectaroscordum siculum in bulb catalogs. By either name, it’s a good choice for piedmont gardens, because it blooms after most of the spring bulbs but before the summer bulbs like Crinum and Eucomis get started.

This is the first flower of 2018 for my clump of Cypella herbertii.  This little irid is amazingly hardy for a plant that is native to Argentina and Uruguay.  It flowers for much of the spring and summer and remains green for most of the winter.  Even when frozen to the ground by very cold weather, the foliage starts growing again as soon as temperatures rise above freezing.  Flowers open early in the morning and usually last only one day, but each inflorescence produces new flowers sequentially for several weeks.

Although Liriodendron is one of most common deciduous tree species around here, I rarely see the flowers, because they open high in the forest canopy.  The twig bearing this one broke off in the wind and landed on my garden path.

The garden’s resident box turtles are enjoying the wet weather.

I hadn’t seen this adult male box turtle in the garden before, but he turned up twice this week [update: three times].  The notch at the front of his carapace is distinctive, so I won’t have any trouble recognizing him if I find him again.

This smaller female is a garden regular.  The kids have named her Penelope.  We offered her a fresh strawberry on Friday morning, and she ate most of it before disappearing into the flowerbeds.

Percy Shelley hasn’t made an appearance yet this year. 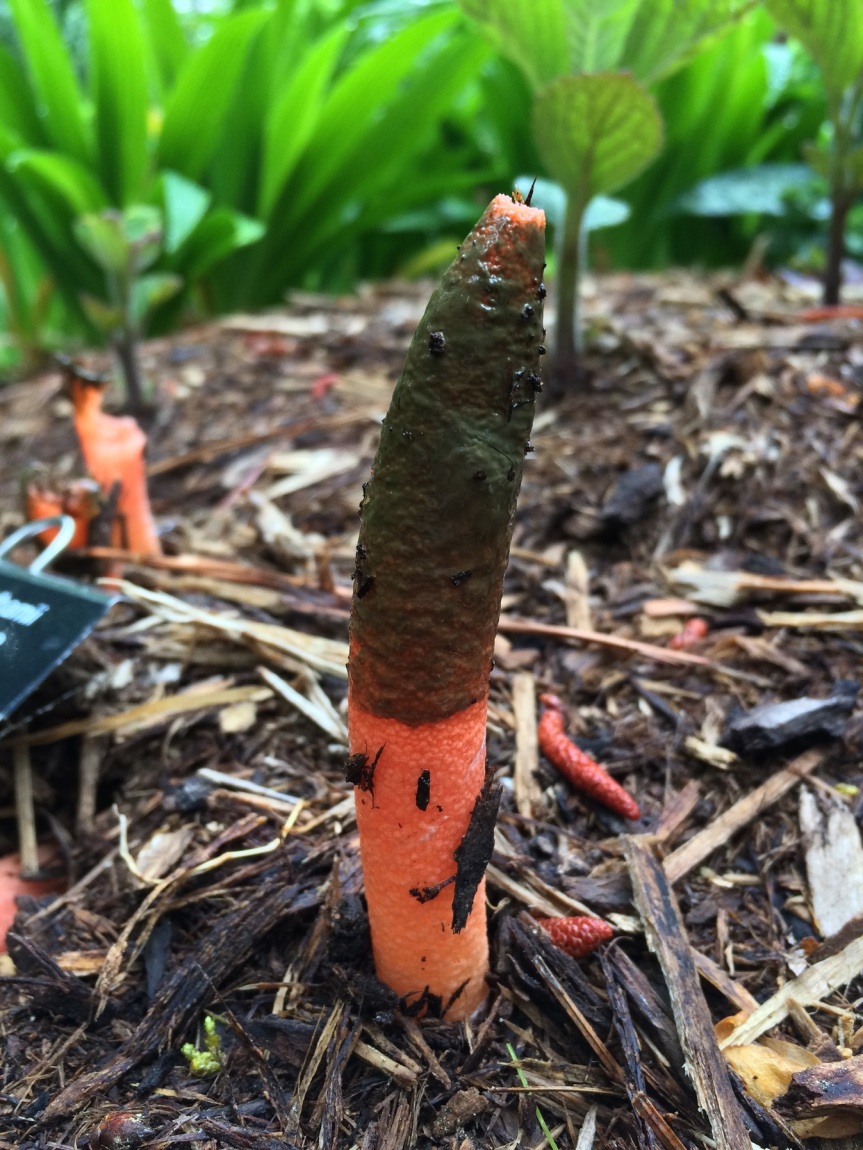 Look what else the rain brought out.  I’m not sure what the scientist who named this species was thinking.  Elegant?

Slugs and snails enjoy munching on the stinkhorns.  Their  smell also attracts American carrion beetles (Necrophila americana), but I was unable to get a good photo of the surprisingly alert insects.  As soon as I get close, they scuttle down to the ground and bury themselves in the mulch.

Want more Six on Saturday?  The Propagator is our host, so head over to his blog.