The Paphiopedilum hirsutissimum buds that were slowly opening last week (see #6) are now fully fledged flowers.  I really like the crisping that has developed along the upper edge of the petals.  It’s a shame that the ends of petals have twisted, making them look narrower, but overall I’m really pleased with this plant. 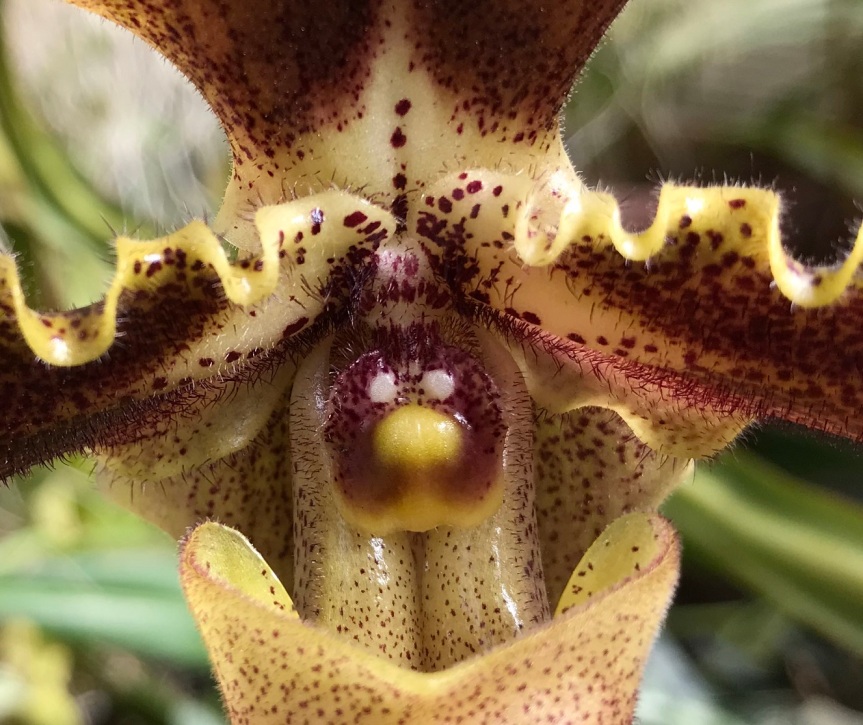 …or maybe a screaming face with a bristly crew-cut.

Oh carpenter bees, you’re so cute and fuzzy.  Why must you drill holes in every exposed piece of wood on our house?

Compared to the last few years, this winter has been wet but very mild.  The winter storms that brought record cold to the Midwest didn’t make it this far south, and our low temperature was 17-18 F (-8 C), a full 10-15 degrees warmer than the lows during the past three or four winters.  There is still the possibility of frost, or even another hard freeze, but spring seems well under way.

At this time of year, the dominant color is the bright yellow of Narcissus.  The old heirloom bulbs that are naturalized throughout the woods at the sites of old cabins or farmhouses have almost finished flowering, but beside the old chimney a few of the plants are still in decent shape.  These classic daffodils have a bright yellow corona and paler yellow petals that are slightly twisted like propellers. 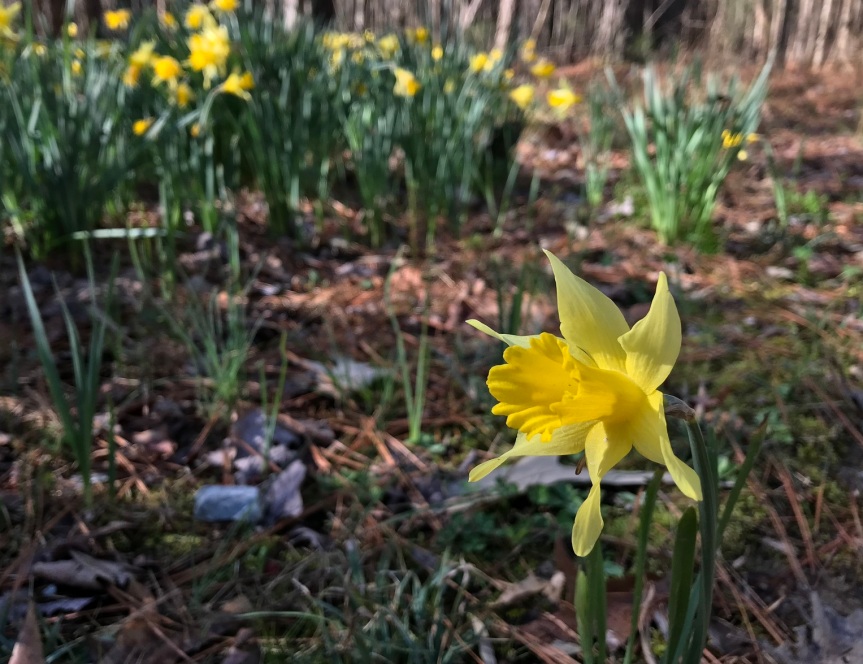 In my garden, I have some that came from a friend who lives in a century-old farmhouse.  They appear identical to the plants beside the old chimney, and I suspect they are all a form of Narcissus pseudonarcissus.

Narcissus are one of the few plants that I can grow outside the deer fence, so I have been attempting to naturalize several varieties along our side of the lane.  Rabbits and deer won’t touch them, not even to experimentally nip off the flower buds as they do to so many other supposedly noxious flowers.

Update:  Yes, that’s four Narcissus, not three.  I never claimed to be good at mathematics. 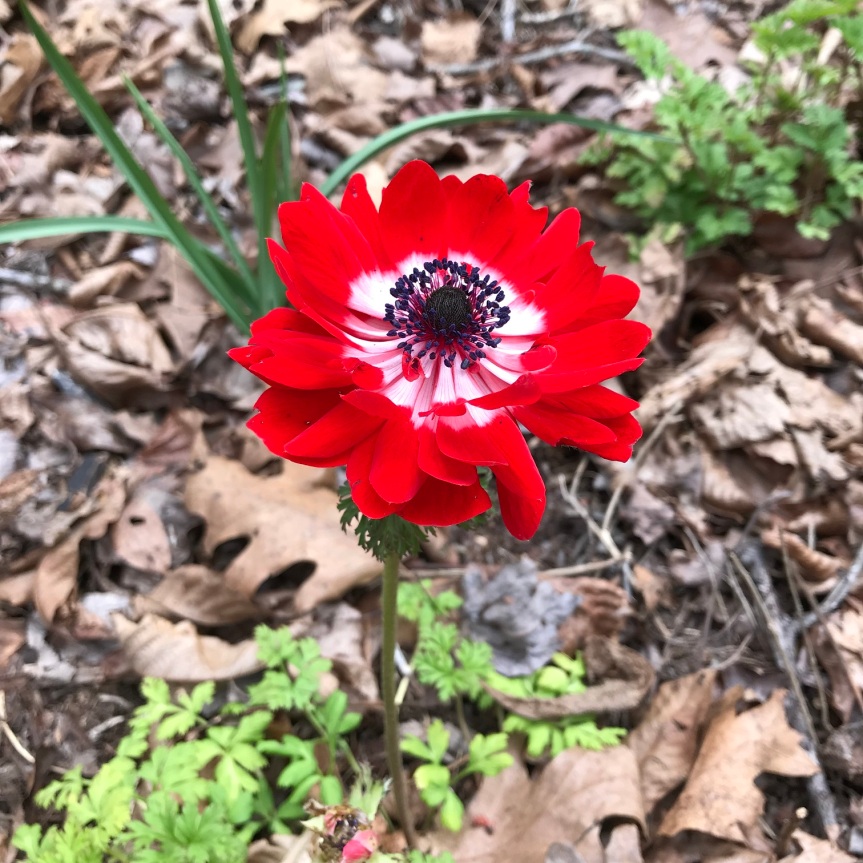 Last autumn I planted ten Anemone coronaria tubers, and they have been growing slowly through the winter.  Most are still in bud, but one precocious plant has been blooming for several weeks.  That is, a single flower has been opening and closing, depending on the temperature and sunlight, for several weeks.  I am really impressed by the longevity of the flower, but it remains to be seen whether the plants will persist over the summer and how they will do during colder winters. 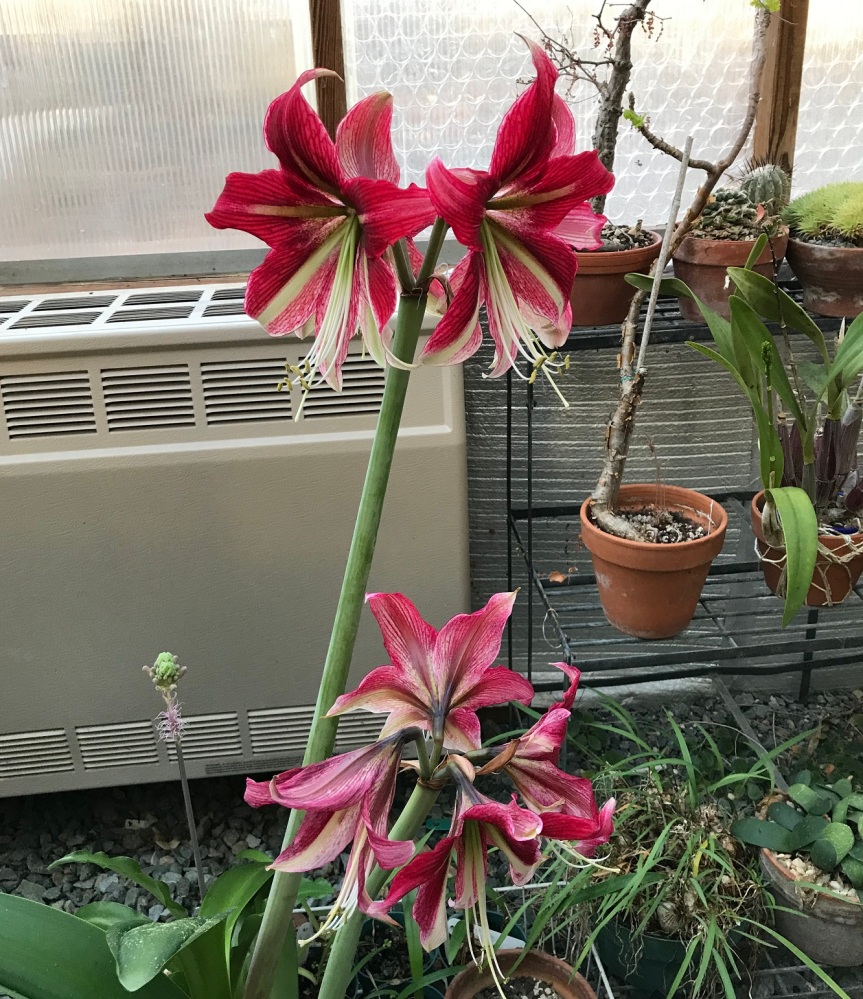 In the greenhouse, the enormous, but short-lived, flowers of Hippeastrum ‘Ruby Star’ were open this week.  H. ‘Ruby Star’ is a hybrid of H. papilio x (H. vittatum x H. cybister) which seems to be a natural winter grower.  When not recovering from shipping, it flowers after the foliage has matured and goes dormant by mid summer.

Some orchid flowers seem to appear suddenly out of nowhere, but others really make you wait.  There seems to be a definite correlation between the amount of time that a flower takes to develop and its longevity, .  The south Asian slipper orchids, Paphiopedilum, are some of the slowest.  It can take months for an inflorescence to emerge from among the leaves and slowly elongate, and then the buds open over the course of a week or more.  When these P. hirsutissimum buds are completely open, I can reasonably expect the flowers to remain in good shape for six to eight weeks, perhaps longer.

Dendrobium lindleyi is a dwarf epiphyte whose native range extends from Bangladesh and Assam through Southeast Asia to southern China.  This species, called D. aggregatum in older literature, often seems to turn up in books about orchid growing as an example of a species requiring a distinct dry dormancy to trigger flowering.  Apart from that one quirk, it is relatively easy to grow.  D. lindleyi is often grown in baskets or mounted on cork bark, but my plant is potted in Aliflor (expanded clay aggregate) which dries very rapidly after watering.  During the summer, while the new pseudobulbs are growing, I hang the pot from the edge of my shade house where it receives full sun for much of the day.  As long as the weather stays dry, I leave it out in autumn until the nights drop into the mid 40s F (6-8 C), but I don’t let it stay out in cold wet weather.  Back in the greenhouse, I hang it high in the rafters on the side without shade cloth and basically forget about it for most of the winter.  If the pseudobulbs shrivel, I might give it a little water every six weeks or so, but mostly it survives on humidity.  Et Voila.  This is the result.