It was a bit of struggle to find six things to write about today.  There aren’t many orchids blooming in my greenhouse at this time of year, and the weather outside hasn’t been conducive to growth of much other than fungus. 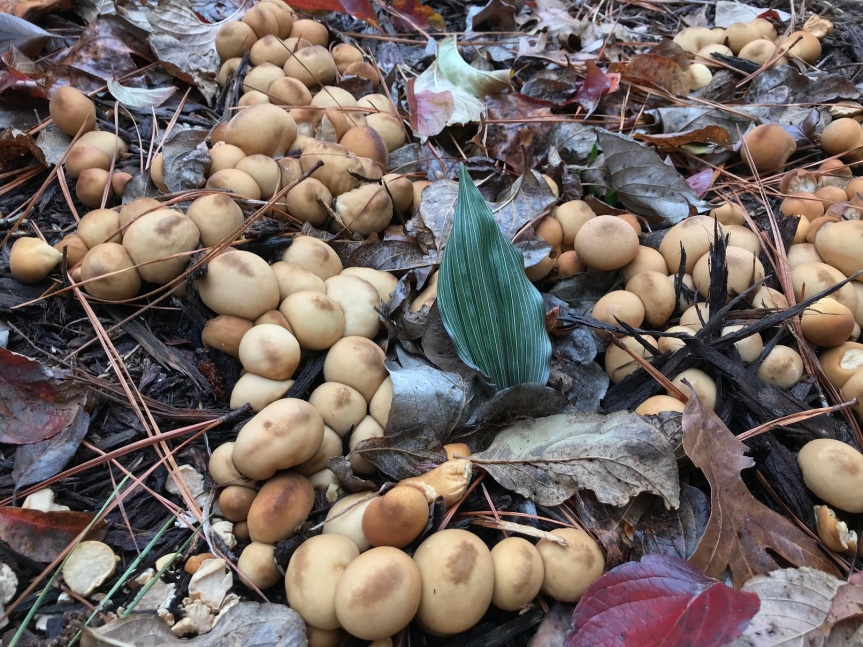 While I don’t enjoy chilly, damp weather, these two species certainly do.  The striped winter-green leaf of an Aplectrum hyemale that I planted last spring has emerged among a dense crop of young puffballs.  I am fairly sure that these are Lycoperdon pyriforme, the pear-shaped puffball. If so, they should be edible, but I’m not certain enough of my identification skills to risk it.  As they say, every mushroom is edible…once.

According to wikipedia, Lycoperdon translates as “wolf farts.”  Just thought you should know. 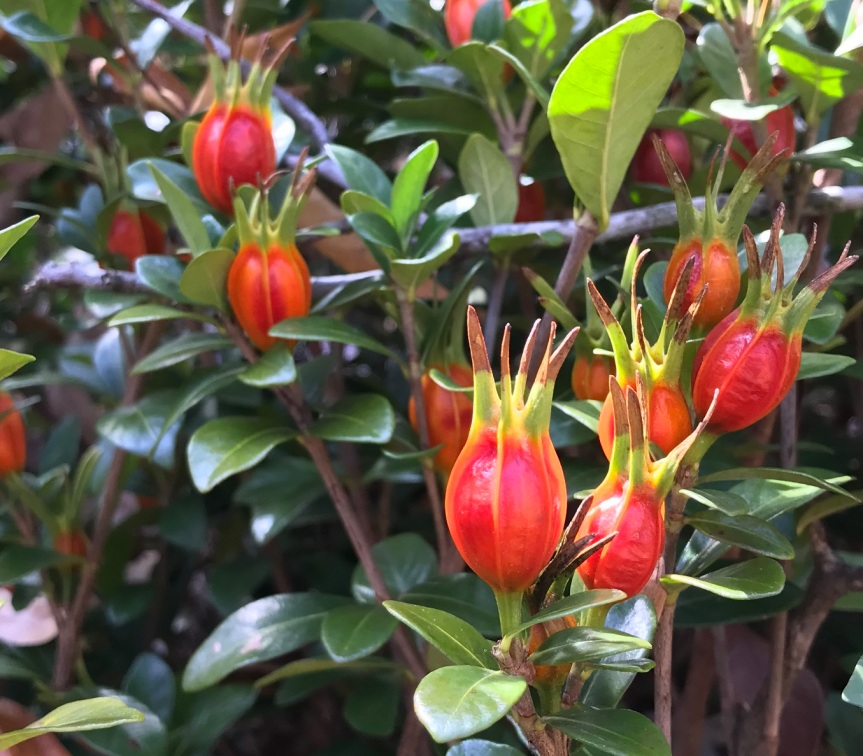 The scented flowers of this G. jasminoides featured in Six on Saturday #46.  Although not fragrant, its fruit are as almost as attractive as the flowers and make a strong argument for growing wild type plants instead of sterile double-flowered clones.  The crown-like tips of the  fruit were originally green but have been burned by frost. 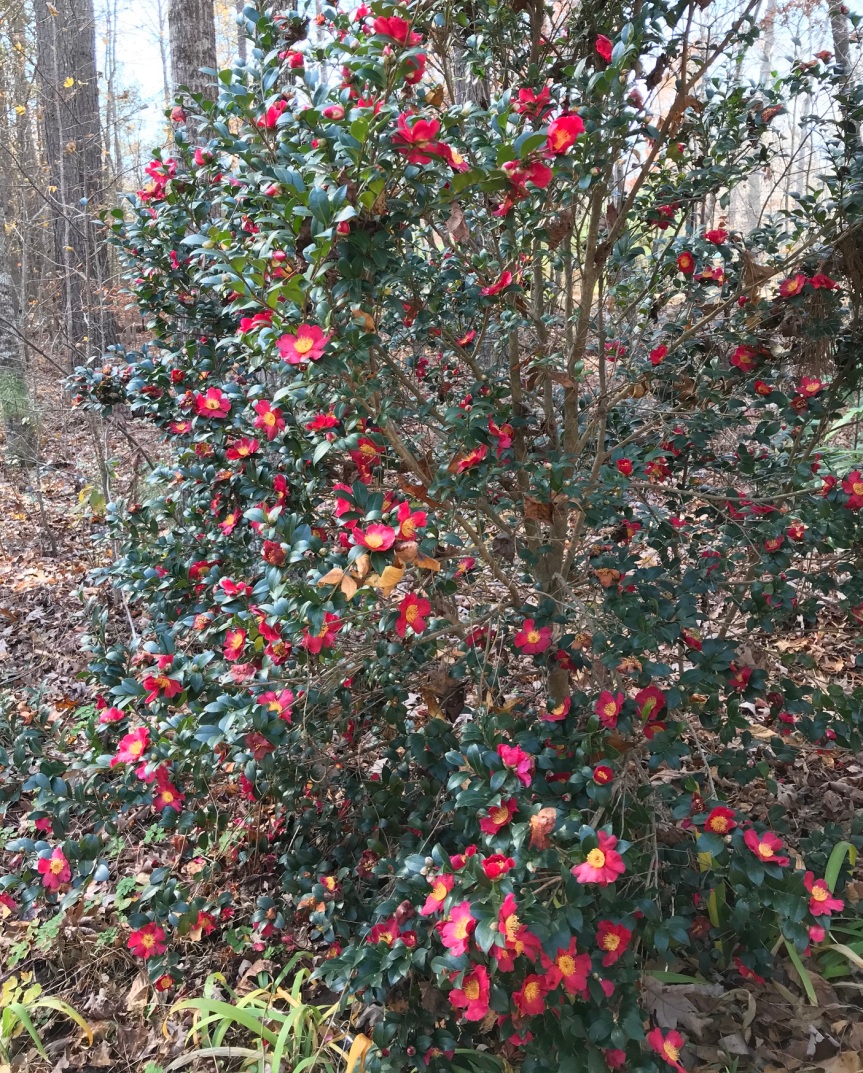 I featured this shrub in Six on Saturday #16 two years ago, but it is too good not to revisit.  When I took this photo, a few sluggish late-season bees were visiting the flowers and getting covered with pollen, but despite their attentions, I have never found fruit.  I’m not sure if this hybrid is completely sterile or just incapable of self pollination.  Flowers can be destroyed by temperatures in the mid 20s F (-3 or -4 C), but the buds mature over a fairly long period, giving me a good crop of flowers both before and after cold snaps.  In the summer, it makes an attractive dark green backdrop for warm weather flowers. 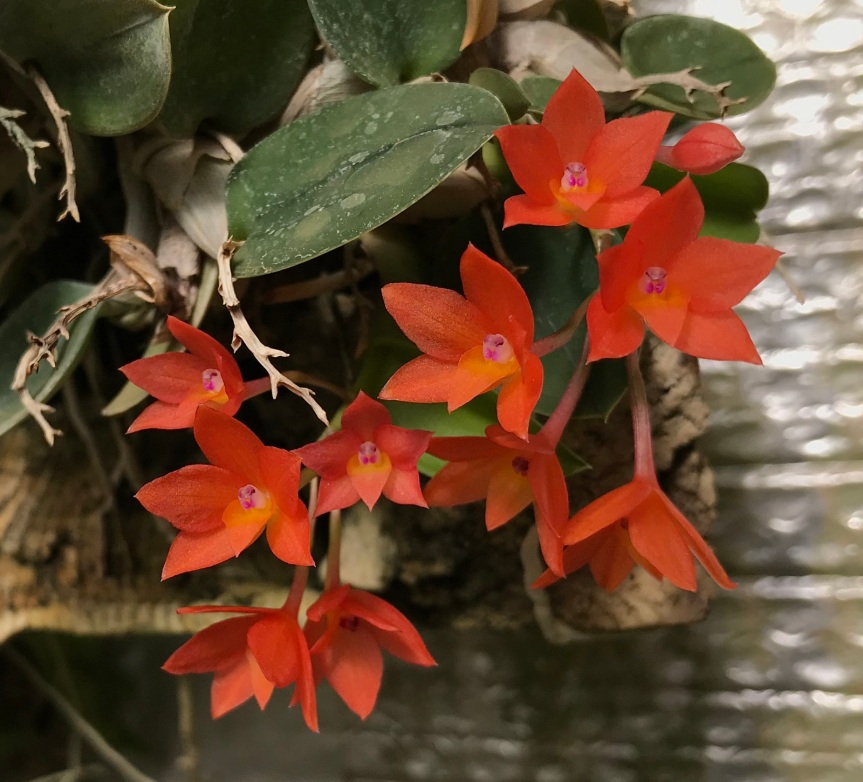 In the greenhouse, Cattleya cernua is flowering on a small slab of cork bark.  This miniature Brazilian orchid was once the type species of Sophronitis, a small genus of miniature epiphytic orchids that were distinguished from Cattleya mainly by flowers adapted for pollination by hummingbirds instead of bees.   However, DNA sequencing demonstrated that C. cernua wasn’t very closely related to the other Sophronitis species, and the whole genus has been sunk into an expanded Cattleya.

Most of the former Sophronitis are cloud forest species that are quite difficult to grow in North Carolina, but C. cernua thrives in our hot summers and brightens up the greenhouse at the dullest time of year. 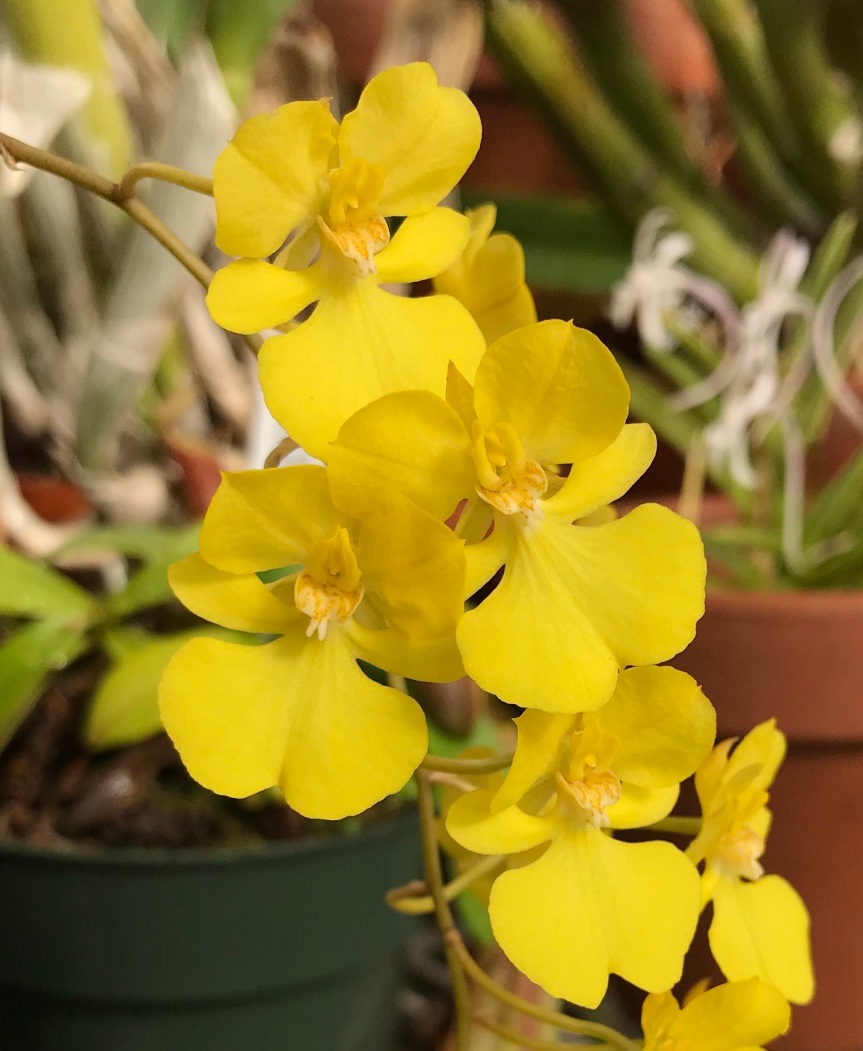 Zelenkoa onusta is from Ecuador and Peru, where it sometimes grows on columnar cacti.  As suggested by this growth habit, it requires warm, dry conditions in cultivation.  My plant is in a small clay pot with a few chunks of scoria, but one of the best plants I have seen is at the Orchid Trail Nursery, growing on a live Pachypodium as a substitute for a cactus. 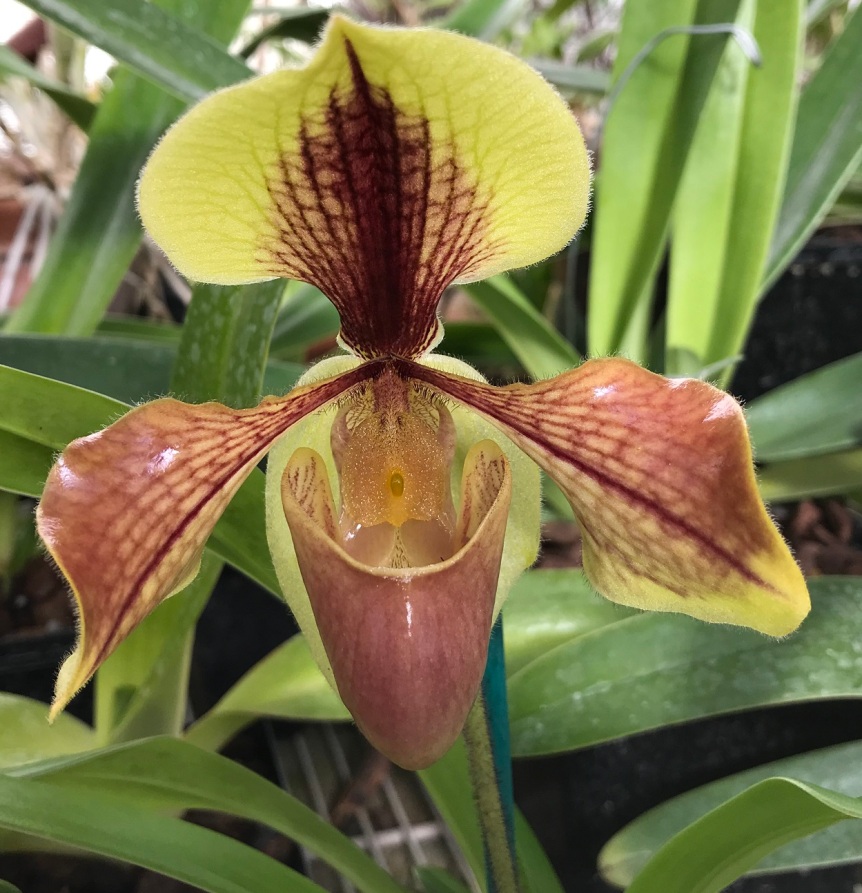 And finally, a recent purchase. Paphiopedilum villosum is from Indochina, where it grows as a lithophyte or epiphyte in damp highland forests.  P. villosum has been popular among orchid growers since the Victorian period and is one of the foundations of the standard complex Paphiopedilum hybrids. This particular plant came from a nursery in Hawaii and is the product of selective breeding aimed at increasing the size of the dorsal sepal and minimizing its tendency to roll back along the sides. 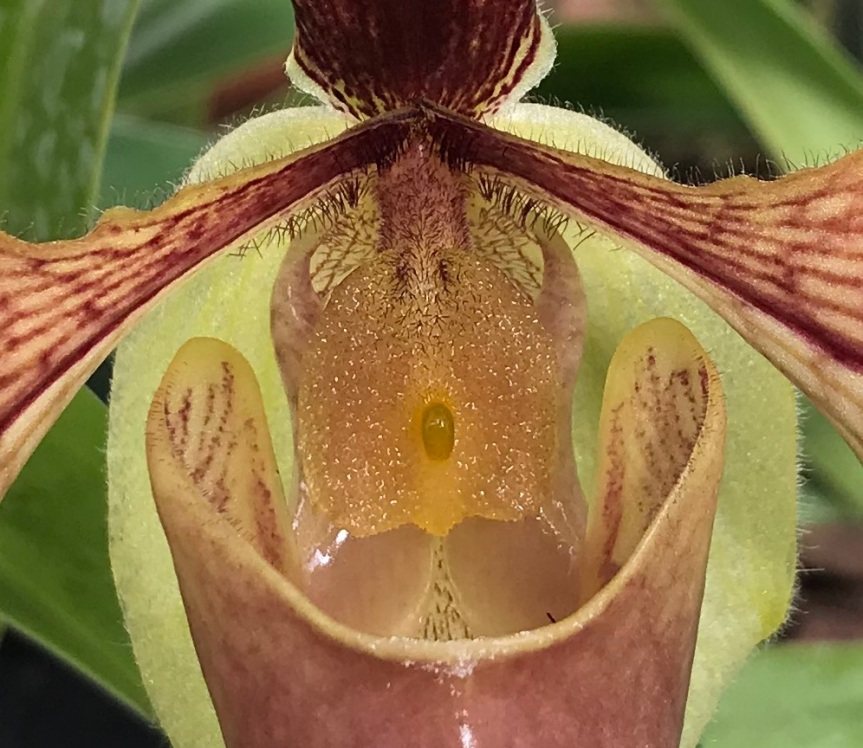 The propagator is the host of Six on Saturday.  Head over there to see his Six and find links to the blogs of other participants.

Frost flowers typically occur in in late autumn when cold weather freezes plant stems but the soil is still warm enough for active roots to push sap into the stem.  As the sap freezes, ice is extruded through cracks in the stem, forming thin ribbons or spines.  In North Carolina, frost flowers are most often associated with Verbesina species, particularly Verbesina virginica (frostweed), but yesterday I found these examples on Salvia elegans (pineapple sage).  They are, perhaps, not as delicate as the frost flowers that form on Verbesina, and from a distance looked more like frost seed pods than flowers, but they seem to have been formed by the same mechanism as the classic frost flowers.

As indicated by the presence of frost flowers, the first freezes of the season occurred on Tuesday and Wednesday nights.  A few weeks ago, we were flirting with 90 F (32 C), but this morning the temperature was about 24 F (-4.5 C).  The growing season for summer perennials and sub-tropical plants is definitely over.  The cannas, bananas, and crinums have all turned black, and in a few weeks I’ll cut them back.  The only plants still flowering outside are Crocus cartwrightianus ‘Albus’, Camellia ‘Yuletide’,  Cyclamen hederifolium, and Abutilon megapotamicum (which continues to amaze me with its hardiness), but buds are expanding on Edgeworthia chrysantha.