We’re almost a week past the autumnal equinox, but it still feels like summer.  Temperatures are running about ten degrees F above normal, and we haven’t had measurable rain since August.  The soil is bone dry, and leaves are starting to dry up instead of changing color properly.  There’s a chance of a shower tonight, but the forecast for the next week is more of the same: bright sun and mid 80s-90s F until Friday at least.

1. Epiphyllum oxypetalum (queen of the night)

The large, fragrant flowers of E. oxypetalum, an epiphytic cactus from southern Mexico and Guatemala, open at night and fade by the next morning.  I was pleased with this solitary bloom, but when I posted a picture on Facebook, a friend told me that his plant had more than 40 flowers!

I think this is S. odorata, but I’m really not sure how to distinguish that species from S. cernua.  Paul Martin Brown [1] says that there is considerable gene-flow between S. cernua and other Spiranthes species, so maybe a definite I.D. is impossible. Either way, I like the flowers.  These little orchids don’t seem to be very long-lived, but they seed around and sprout in the pots of various bog plants.  This one volunteered in a pot of Gentiana autumnalis.

About nine years ago, I transplanted some root suckers from a large persimmon planted by my wife’s grandparents in Pennsylvania, probably in the 1940s.  The transplants have finally given us some fruit, which is seedy but delicious.  These are the first of the harvest, and we’ll be picking more as they become soft enough to eat.  You do NOT want to sample an American persimmon that isn’t fully ripe.  They are unbelievably astringent. 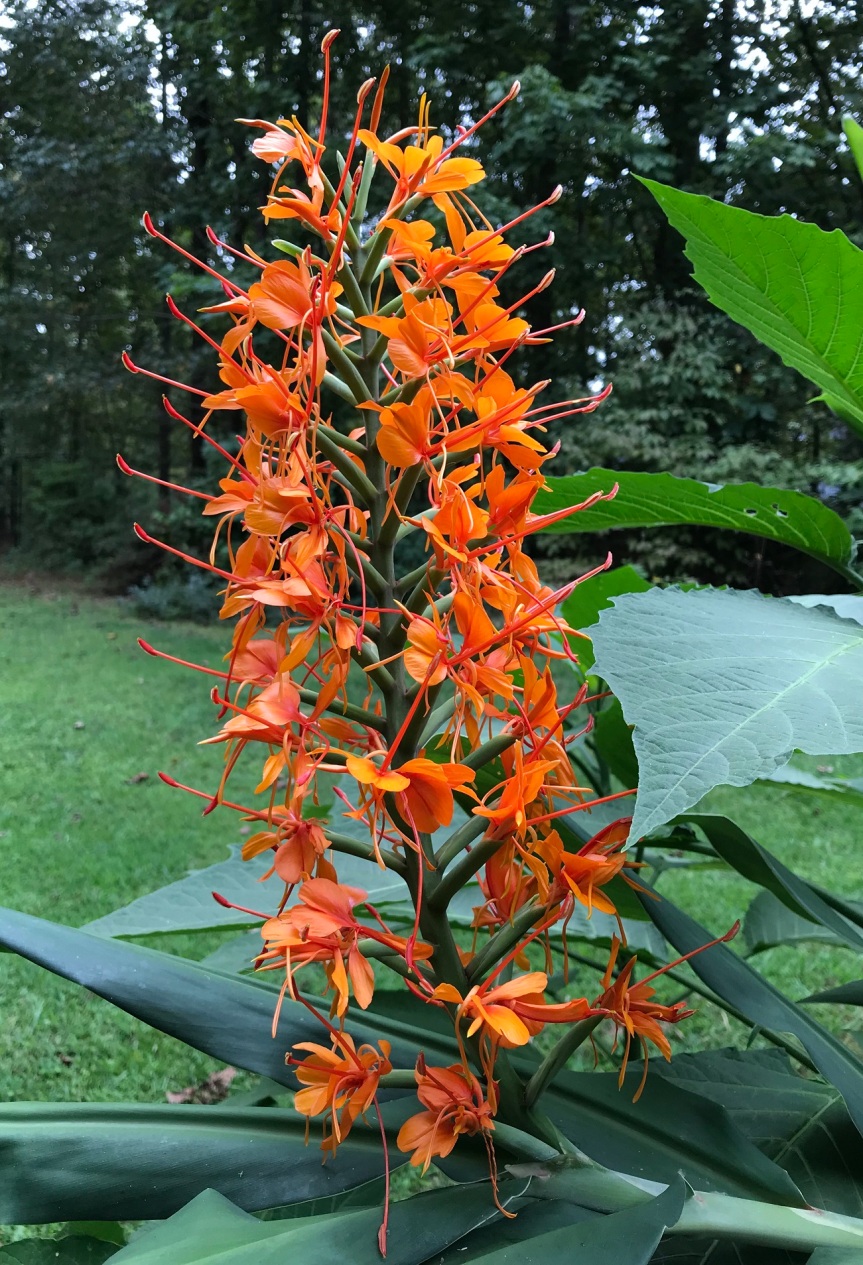 I thought I had already featured this hardy ornamental ginger, but I can’t find it in any past blog posts.  The flowers lack the fragrance of H. coronarium, but I am a sucker for bright orange.  In previous years, it has given me one flush of flowers at the tail end of summer, but this year the clump has finally grown large enough to flower on and off for months.

This is a white flowered clone of the sterile hybrid Colchicum byzantinus.  My colchicums have struggled this year, probably due to the high temperatures and lack of rain in autumn thus far, and many have not yet poked their noses above the soil.

S. elegans is usually grown as an annual north of zone 8, but my plants survived last winter.  Another sign that climate zones are shifting north, I suppose.  This species gives me attractive foliage on a neat shrub-like form for most of the spring and summer, and then it flowers just in time for the autumn migration of the ruby-throated hummingbird.

The propagator is the host of Six on Saturday.  Head over there to see his Six and find links to the blogs of other participants.

In cultivation, most tropical orchids flower in late winter and spring, so the end of summer into early autumn is generally the quietest season for orchid growers.  With carefully chosen plants, however, an orchid collection is never entirely without flowers.  Here are two Encyclia species that produce gorgeous flowers in August and September, just when my greenhouse is looking most barren.

Encyclia atrorubens is from oak forests in Oaxaca and Guerrero states in Mexico.   Carl Withner reported that he saw it growing in the moutains near Acapulco [1].  In my greenhouse, new growth begins in the summer, and the plant flowers on immature pseudobulbs.  It seems susceptible to rot, so I grow it very dry in a terracotta pot with large chunks of scoria (red lava rock). It blooms well when the new growths and roots extend over the edge of the pot.

The flowers have very dark pigment, and the leaves become flushed with red/purple in bright light, but the flower stems are always a clear grassy green.  The contrast between stem and flower is exceptionally beautiful, and against a green background the dark flowers seem to float unattached.

Encyclia dichroma grows on rocky outcrops under fairly arid conditions in the Brazilian state of Bahia.  The plants have elongated, cone-shaped pseudobulbs with rigid leaves  and grow well bright and dry with plenty of air movement.  Give it more light than you would a typical cattleya alliance plant.

Withner [2] says that plants in nature bloom in the Brazilian spring (September/October in the southern hemisphere) but in early summer in cultivation.  However, my plant consistently blooms in September at the same time as E. atrorubens.  A hybrid of the two might be interesting.

1. Withner, C.L. (1998). The Cattleyas and their Relatives: Volume V. Brassavola, Encyclia, and Other Genera of Mexico and Central America.  Timber Press, Portland, Oregon.

Generally, by the time I have had a plant for a couple of years, I am fairly sure of what it needs to grow and bloom successfully.  Either that, or I have killed it and am sure of what was not successful. Behria tenuiflora is currently flowering for the first time in my collection, and not only do I not have any idea what induced it to flower, I’m not really sure what caused it to grow.

B. tenuiflora is a small bulb native to the southern end of the Baja California peninsula.  It was once included in the onion family, Alliaceae, but more recently has been classified in the Themidaceae, a small family of bulbous plants from Mexico and the southern United States [1].  Its closest relative is the Mexican Bessera elegans (see entry 2 of Six on Saturday #8), which is commonly available from the big bulb vendors and seems relatively easy to grow as a potted plant in this climate.  On the basis of my success with Bessera elegans, I leapt at the chance to purchase a seed-grown corm of Behria tenuiflora from Telos Rare Bulbs in 2016.

Based on what I had read about the plant, I expected it to be a summer grower–its habitat supposedly receives most of its rain in the summer monsoon–and its growth in 2016 supported that supposition.  It started growing later than my Bessera plants and went dormant later, but it definitely grew in late summer.  However, it did not bloom that year.

In 2017, it didn’t sprout, and at the end of the summer I unpotted it, expecting to find it dead.  Instead, the corm seemed perfectly healthy, just dormant.  The same thing happened in 2018.  In winter 2018-2019, I tried giving it a few light waterings to see if it wanted to be a winter grower.  No, it didn’t.

This summer, I put it outside yet again.   Surprisingly, a single cylindrical leaf sprouted in July, and it has now rewarded me with its bright, candy-like flowers.  Judging by their shape and color, they are surely pollinated by hummingbirds.

I am not certain what caused it to grow and bloom this year.  My best guess–and this is only a guess–is that the growth is a response to moving it from a terracotta pot to a plastic pot this spring.  Behria tenuiflora comes from an arid environment with irregular rain, so I had assumed that it would grow best in soil that dried rapidly.  But perhaps it is adapted to remain dormant after intermittent showers and to grow only when significant rainfall occurs and the soil will likely remain moist long enough for the plant to complete its growth cycle.  The more constant moisture in a plastic pot might be what it needed in order to break dormancy.

I guess I’ll have to wait and see what happens next year.