This plant has a really cool backstory.

S. helleri was described in 1825 and was grown in Victorian and Edwardian plant collections, but it eventually died out in cultivation. The final image of a cultivated S. helleri plant was published in 1907, and it seems likely that the last cultivated plants died during fuel shortages and bombing raids in World War I and II. All attempts to find more plants in their natural habitat near Rio de Janeiro failed, and the species was considered extinct, both in cultivation and in the wild.

Then, in 2015, a Swiss botanist decided to crowdsource one last search for the species. He posted a couple of old pictures of S. helleri to an online forum for Brazilian plant identification–the botanical equivalent of a missing person flyer. A month later, he received a response from a Brazilian botanist. She had realized that a photograph she took in 2008 of an old railway embankment included several plants that resembled S. helleri. Returning to the site, she confirmed that they were indeed the missing species.

Drama ensued. The embankment was slated to be cleared when the old railroad was converted into a bicycle park, and although endangered species receive legal protection, no one bothers to put extinct species on endangered species lists. The plants were still alive only because clearing had been briefly delayed due to a rock fall.

The plants were eventually protected, a small amount of seed was collected and distributed to growers in Brazil and the USA, and six years later, I have the opportunity to grow my own S. helleri.

I started with a small packet of seed that I scattered on the surface of a 2-inch pot filled with a 1:1 mix of commercial potting soil and perlite. In December 2020, the pot went into a sealed 10-gallon aquarium under LED grow lights, together with a mix of other gesneriad species. Two seeds germinated in late January 2021, and the seedlings grew relatively quickly. In May 2021, I repotted the seedlings, the largest into a 5-inch pot, and the smaller into a 3-inch pot. Both plants are currently flowering.

For more details on the discovery and rediscovery of S. helleri, see Gesneriads: the journal for gesneriad growers 66(1-2), 2016. 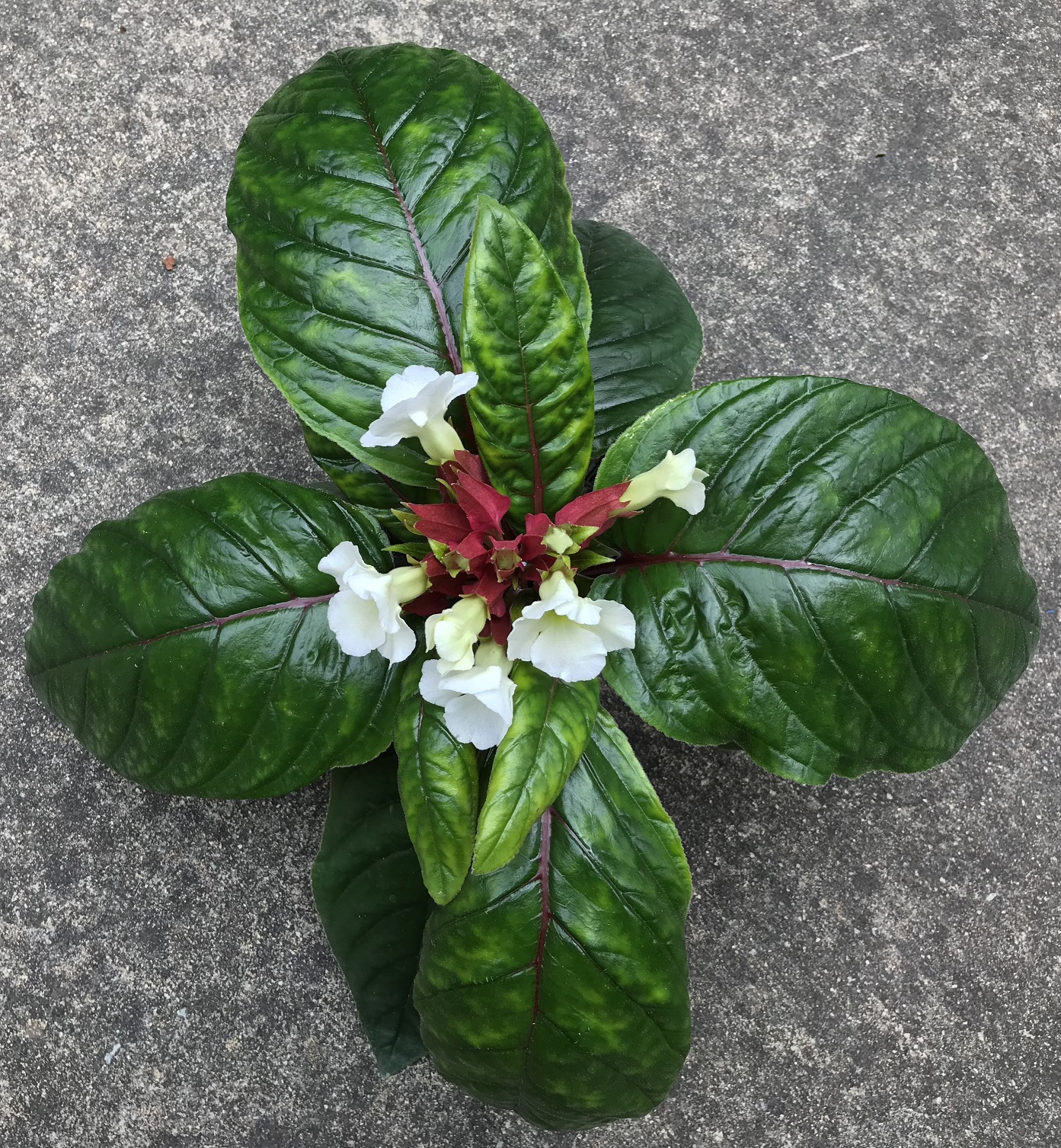 I have previously written about two fine old primary hybrids made with Paphiopedilum rothschildianum: the Victorian P. Lady Isobel and P. Saint Swithin. Here is a modern one, and it may well be the best.

P. adductum var. anitum is sometimes considered a separate species, P. anitum, in which case this hybrid would be P. Wössner Black Wings (P. rothschildianum x P. anitum). From a horticultural point of view, there’s something to be said for distinguishing the dark plants made with P. adductum var anitum from those made with lighter colored P. adductum clones. However, the International Orchid Register lists P. Wössner Black Wings as a later synonym of P. Johanna Burkhardt, and both the Kew World Checklist of Selected Plant Families and a recent checklist of the genus Paphiopedilum (Koopowitz, H., 2018, Orchid Digest 82: 178-235) consider P. anitum to be a synonym of P. adductum.

Eight hybrids using P. Johanna Burkhardt as a parent have been registered, but none of the photos I have seen suggest that they are any better than–or even as good as–their parent. I’d go so far as to say that in this group of orchids, the primary hybrids are almost always better than complex hybrids. After more than 120 years, P. Lady Isobel and P. Saint Swithin are still well worth growing, and I suspect that the same will be true of P. Johanna Burkhardt in another century. 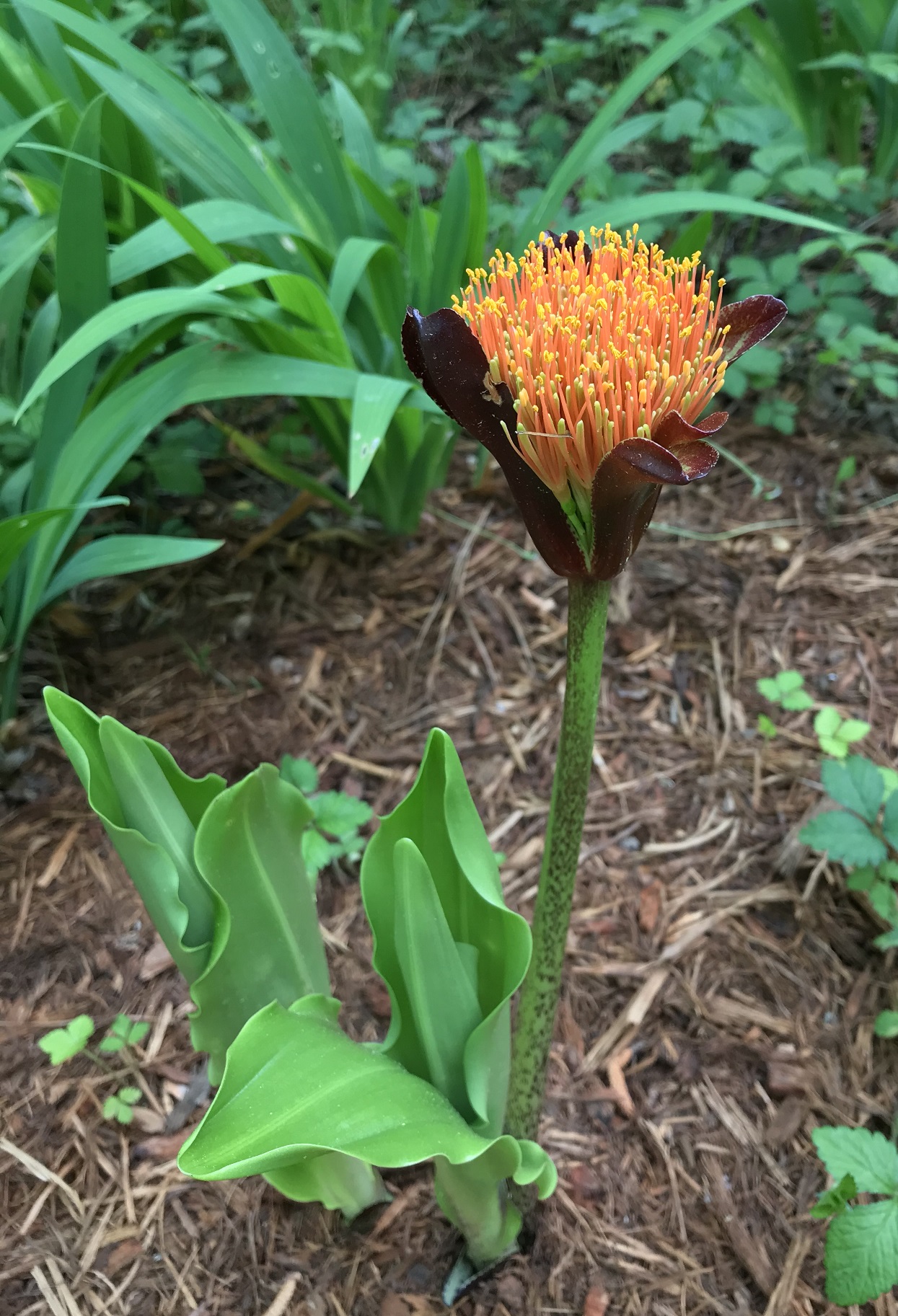 This is exciting! After about six years in the ground, my Scadoxus puniceus has finally decided to flower. I was afraid that I wouldn’t get it to see it in full bloom: The day after I noticed a bud emerging from the mulch, the temperature dropped to 28 F (-2.2 C), so I surrounded it with bubble-wrap and covered it with a large plastic pot. That seemed to be sufficient insulation, because a couple of weeks later I have this beautiful orange inflorescence. The many small flowers are surrounded by petal-like spathes, giving it the appearance of a large single bloom.

Scadoxus puniceus is an African member of the Amaryllidaceae, the daffodil family, so it is not a true lily. Its range in the wild extends from Western Cape Province in South Africa northwards to Tanzania, with disjunct populations in Ethiopia [1}. Given its tropical and subtropical native habitat, it is somewhat surprising that it has done so well in my garden. It has survived temperatures as low as 5.5 F (-14.7 C) when buried under a thick layer of mulch, and despite its reported preference for a dry winter dormancy, it grows in clay that stays wet all winter long.

I suspect it took so long to flower because it is heavily shaded in summer by a large American beautyberry bush (Callicarpa americana). Last year, I planted a couple of young plants in sunnier spots. They survived the winter but are still too small to flower. Maybe next year.

eBay can be a wonderful source for rare and unusual plants, but there’s always a chance you won’t get what you expect. I bought this plant in 2014, and it arrived as a small dormant bulb with no distinguishing characteristics. It could have been almost anything, and I had to wait 6 1/2 years to find out if I got an excellent deal on a very rare bulb, or paid way too much for a mislabeled Narcissus. In this case, I can breathe a sigh of relief, because the plant was as advertised.

Paramongaia weberbaueri is, despite its common name, not a daffodil. It is in the same family as daffodils, the Amaryllidaceae,, but while daffodils are native to the Mediterranean region, Paramongaia is from South America–specifically western Peru, where it grows in the rain shadow of the Andes. There are apparently two forms of the species, a high altitude form which grows and flowers in summer, and a winter-growing lowland form. My plant is obviously the winter-growing form. I keep it in a bright spot in the greenhouse year-round (minimum winter temperature 60 F, 15 C; summer maximum 93 F, 34 C). During winter I water at least once a week, or more frequently if the soil dries out. Then I leave it completely dry, no watering whatsoever, all summer long. Presumably, the humidity in the greenhouse is sufficient to keep the bulb from desiccating while dormant.

The flower bud developed relatively slowly for an Amaryllid and lasted just under a week in good condition. The fragrance was wonderful.

So far, my plant has shown no tendency to produce offsets. The anthers failed to produce pollen–or dried up prematurely, I’m not sure which. In any case, I was unable to self-pollinate the flower.

Depending on how I do the math, I have been waiting to see these flowers for eight years, or just over twenty five years.  Back in the mid 1990s, when I first started growing orchids, I purchased a seedling of Renanthera imschootiana ‘Saigon’ x self to grow under fluorescent lights in my student apartment in Michigan.  Orchid growers will recognize that it was a poor choice for my growing area; Renanthera species and hybrids require high humidity and very bright light–up to full tropical sun.  After a few years, I came to the same realization and sold the plant to make room for something I had a chance of flowering.

Fast forward to about 2005.  I now lived in North Carolina and had a greenhouse where I could give large orchids much brighter light and higher humidity.  I still loved red flowers, and the very rare R. imschootiana has a certain mystique. I decided to try growing the species again

But I couldn’t find a plant to buy.  This isn’t uncommon if you go searching for one particular orchid.  There are about 28,000 orchid species and hundreds of thousands of registered hybrids, so only a tiny fraction are in commercial production at any time.  Someone flasks a batch of seedlings, and that species is available for sale until they run out.  Then, the species may be virtually unobtainable, unless you know a grower who will give you a division, until someone else produces a new batch of seedlings.

Finally, in 2012, I purchased a seedling of R. imschootiana ‘Newberry’ x ‘Saigon’ from Carter and Holmes Orchids.  That one of the parents of the new seedling was the same as the parent of my old seedling probably speaks to the small gene pool of cultivated plants in the U.S. (Carter and Holmes doesn’t seem to have plants for sale any more, but I see that seedlings are available from Santa Barbara Orchid Estate).

So, about the plant:  R. imschootiana is a relatively small species in terms of leaf-span, although it can grow tall with time.  It is basically a slow-motion vine, taking ten years to grow the distance that a honeysuckle vine could grow in a week, but it eventually grows long enough to need support.  The main stem occasionally branches, and the roots and inflorescences grow from leaf axils at random intervals.  My plant is potted in a 4″ terracotta pot filled with large chunks of scoria (red lava rock).  When it got top heavy, I put the 4″ pot in a 6″ pot, and roots have filled the space between the pots.  The vining stems are supported by several stiff wires. 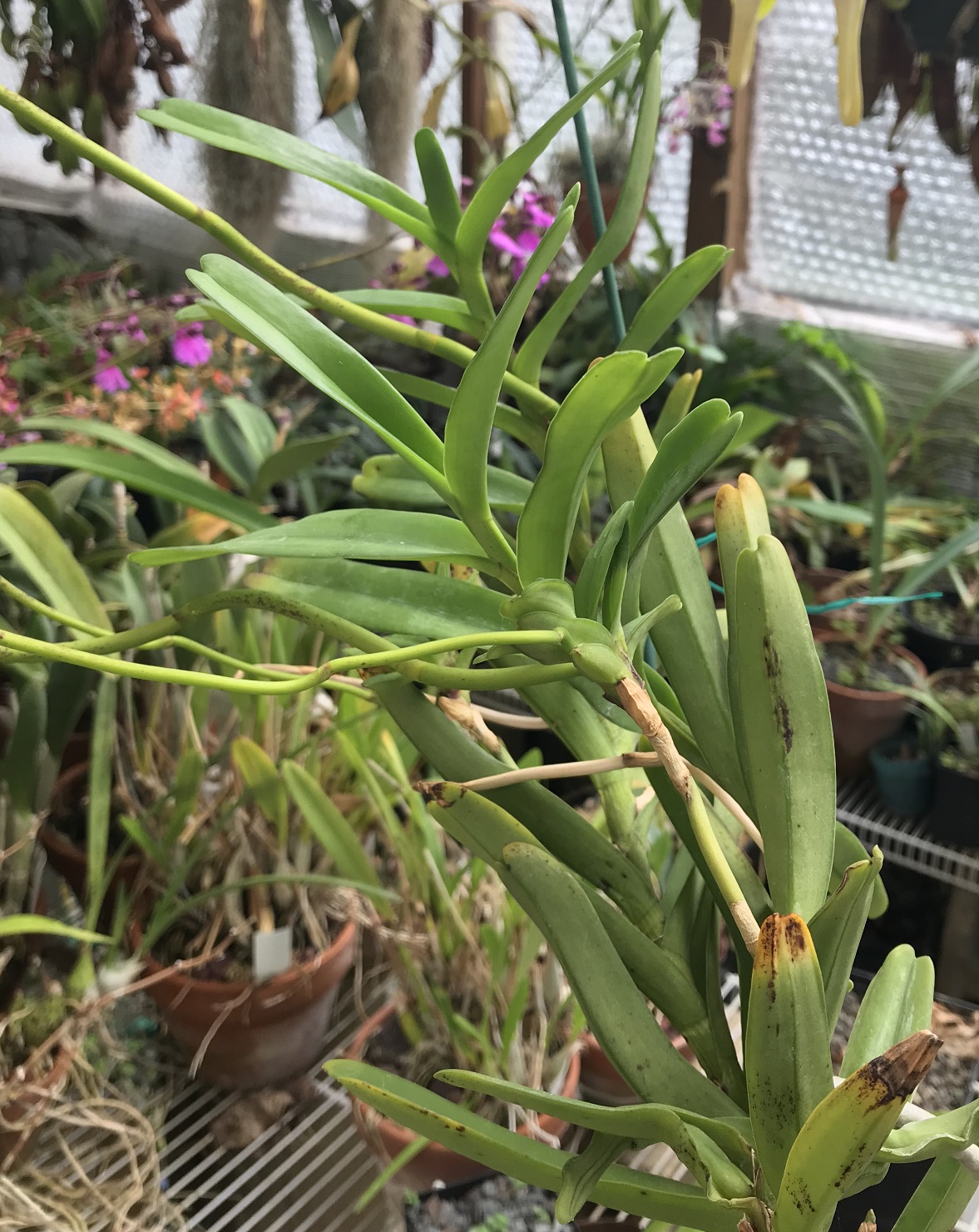 After a few years in my greenhouse, the plant sprouted a stem that resembled an inflorescence, but instead of flowers it produced a single terminal keiki (plantlet).  The next year, the same thing happened, and the year after.  Many of the Renanthera species and hybrids more common in cultivation are lowland tropicals that grow well in a warm greenhouse, but R. imschootiana is from higher elevation (Assam, northern Indochina, Yunnan) and is noted for tolerating winter temperatures near freezing. Suspecting that the plant was too comfortable with a minimum temperature of 60 F in my greenhouse, I left it outside during the autumn of 2018 until temperatures dropped to near freezing.  I then put the plant on the floor of the greenhouse near the door and reduced watering so that it stayed cool and dry for much of the winter.  Whenever the weather was dry and above freezing, I put it back outside again.  Result: nothing.  Last winter, I just left the plant on a bench in a sunny part of the greenhouse and watered it along with all the other orchids.  Result:  four inflorescences. 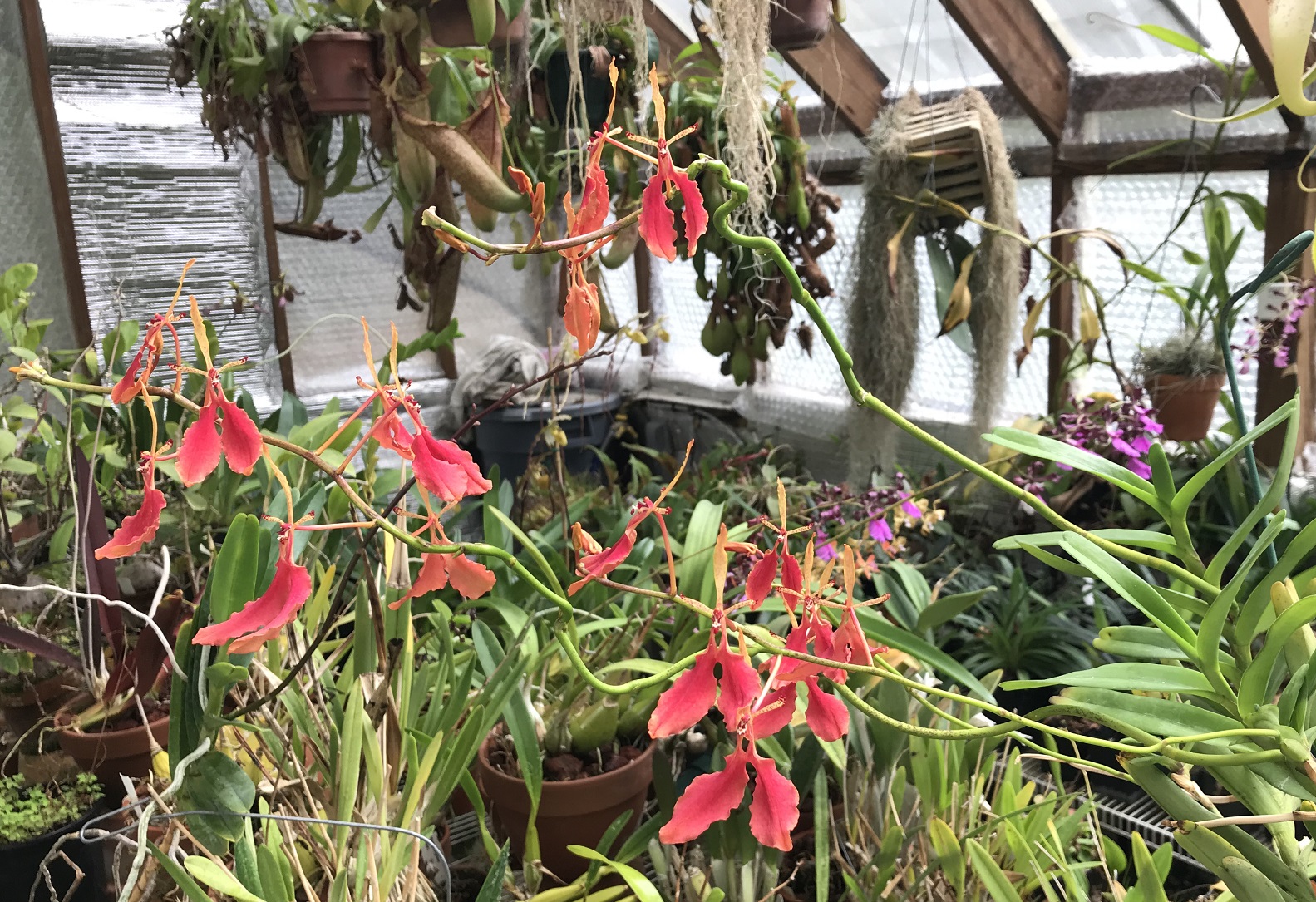