This isn’t a very good photo, but it serves as a record of the first snake of 2018 in the garden.  As I was pruning the roses on January 28, I disturbed this eastern worm snake (Carphophis amoenus amoenus) in the leaf litter.  I was surprised to find it at the surface so early in the year, particularly when there had been a foot of snow on the ground just ten days earlier.

Judging by the frequency with which I uncover them while digging, worm snakes are probably the most common snake species in the garden.  More details here.

The meteorologists predicted that we would get one or two inches of snow this week.  Instead, the storm dumped  12” (30 cm), about three times the average annual snowfall for our part of North Carolina.

These are all color images, but the snow and pale sky seem to have completely desaturated the garden and woods. 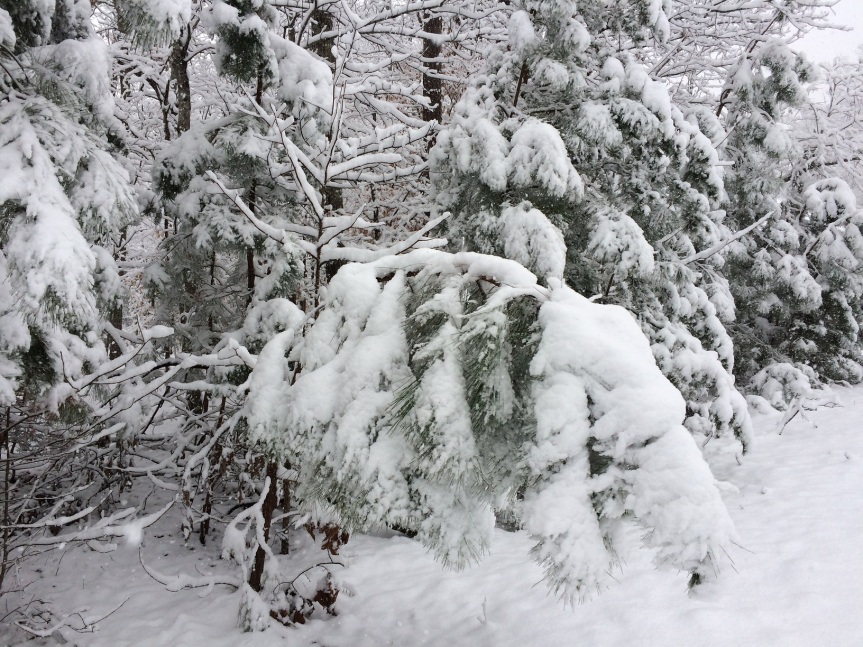 Visit The Propagator’s latest post (and the comments therein) to see the more colorful Six on Saturday photos of other garden bloggers.

Here’s another picture of the Macleania species that I discussed in a post ten days ago.  As the flowers have aged, the color has changed significantly.

And here is what they looked like ten days ago:

Some years, the first daffodils bloom about now, but this year almost everything in the garden is either dead or in deep dormancy.  For a little floral color, I have to rely on my greenhouse.

Here are three orchids with nothing much in common except that they bloom now.

This little orchid from Mexico and central America blooms pretty much all year round, with a single flower on each wiry inflorescence.  Like a surprising number of orchids, M. ringens is pollinated by pseudocopulation.  In other words, it induces naive (or desperate) male bees to mate with its flowers [1].  The labellum of the flower resembles the rear end of a small red-and-yellow bee, and it even produces a scent that mimics the pheromones of virgin queens [2].  Drones that attempt to mate with the flower transfer pollen to and from the overhanging yellow column. 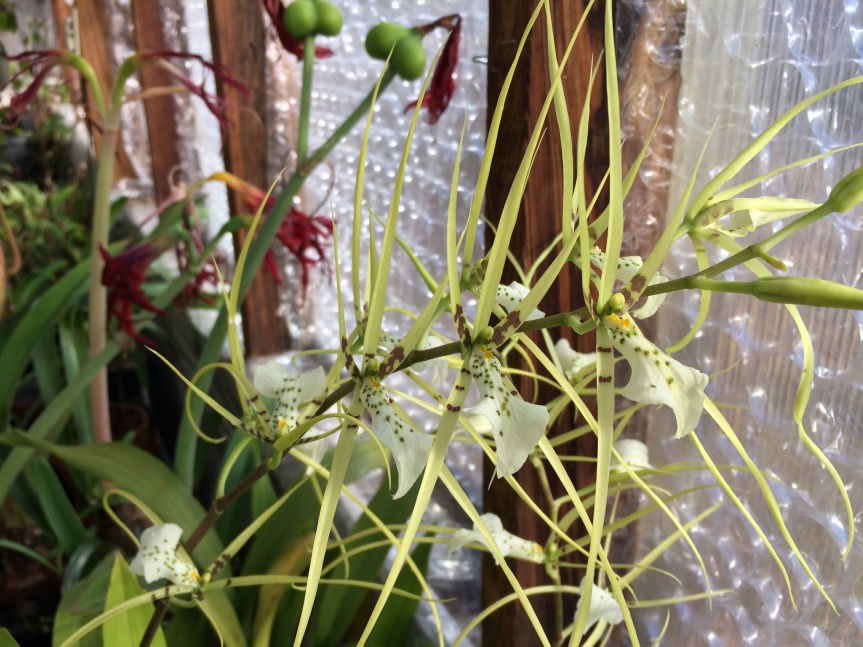 Brassia orchids also deceive their insect pollinators, but the mechanism would probably be better described as “pseudo-predation” rather than pseudocopulation.  Brassia flowers are pollinated by spider-hunter wasps which attack and repeatedly sting the labellum, apparently mistaking it for the body of a large spider [3].

I think this is probably the Mexican/central American B. verrucosa, but I am not certain. It has been suggested that there are actually two different species circulating under that name [3], and in any case, Brassia species all look very similar to my non-expert eye.

This is an artificial hybrid of two Broughtonia species, the Jamaican B. negrilensis and Cuban B. ortgesiana which was registered by Claude Hamilton, a well known grower and hybridizer of Caribbean orchid species.

No bonus points for guessing the pollinator of this plant.  It has hot pink tubular flowers of heavy, waxy substance.  It has to be pollinated by birds, right?  If I tell you that it’s from South America, then it’s obviously hummingbird-pollinated.

Macleania–a genus in the Ericaceae, the blueberry/rhododendron/heather family–is a plant geek’s delight.   Macleania species are found in central and South America, generally in high altitude cloud forest. Many are epiphytes that produce lignotubers, swollen roots or stem bases that store moisture and nutrients.  Their tubular flowers come in shades of bright orange, red, and pink, highlighted with green and yellow, and their berries are often sweet and edible.

The label of the plant illustrated above, Macleania sp. aff. smithiana, indicates that it may or may not be the species M. smithiana.  It generally fits the description of M. smithiana, except that its flowers are pink/yellow instead of orange-red/green.  Since plant descriptions are generally based on a limited range of specimens, it may turn out to be a color variant of M. smithiana.  Alternatively, it might be a closely related species.  The “aff.” (affinis) in the label reflects that uncertainty.  It came with an accession number from the Huntington Botanical Garden (HBG 89922), so there’s a chance I may be able to find out more someday.

I purchased this rooted cutting in autumn, 2016, because it was advertised as originating from lowland forest near Esmereldas, Ecuador.  Most Macleania species in cultivation are from higher elevation and are therefore less likely to tolerate our long hot summers.  So far, the plant has performed well, producing clean new growth and blooming for the first time this month.  I am growing it in a mix of permatill and long-fiber sphagnum moss, outside under shade-cloth in summer and in a cool corner of the greenhouse in winter.