This isn’t a very good photo, but I am very excited to have finally found a pseudoscorpion, thirty or more years after I first read about them. Pseudoscorpions are arachnids, like spiders and true scorpions, and they are found in a wide variety of habitats worldwide–including at least one species that likes to inhabit old books, where it feeds on booklice. They are part of the complex world of tiny animals that fills every garden but is largely unseen, even by the most observant gardeners.

The largest pseudoscorpion species is only about a centimeter long, and most of the 3000+ species are only a few millimeters long. Unlike true scorpions, they lack a tail with venomous stinger, and instead they have venom glands connected to their pincers. But don’t fear; the venom is only a cause for concern if you are a tiny creature like a mite or a springtail that the pseudoscorpion might like to eat.

I found this pseudoscorpion while I was hammering wooden plugs inoculated with shiitake mycelia into some fresh oak logs to expand my mushroom garden. I suddenly noticed a tiny creature scurrying across the bark near my mallet. At first glance, I wondered if it might be a newly hatched tick, but its movement didn’t seem quite right. As soon as I looked a little more closely, I knew exactly what it must be. Unfortunately, it is right at the edge of my camera’s focusing ability, but I’m glad to have some sort of permanent record even if it is a but blurry. Maybe I should get one of those little macro lenses for my iphone, in case I find another one in the next thirty years.

Six on Saturday today is another garden project. This one adds wildlife habitat to your garden and provides the opportunity to see animals that are usually hidden from view.

A cover board is exactly what it sounds like: a wooden board or piece of sheet metal that is placed on the ground to provide habitat for small animals. They’re often used by herpetologists to attract reptiles and amphibians, but they also attract insects, spiders, and small mammals.

This past spring, the kids and I placed three cover boards–two wooden boards and one piece of corrugated metal siding–in likely spots around our property. Over the summer and autumn, we have checked the boards once every two weeks, which we think is a decent compromise between checking so often that animals are frightened away, and checking so infrequently that we miss things.

If you live in a place with venomous snakes, it’s a good idea to use a rake or snake hook to lift cover boards. Pull the board towards you, so that you will have the upright board between you and any disturbed snakes. If you find a small animal, take a few pictures and then carefully lower the cover board again. Gently move the little creature to one side first, and let it crawl back underneath after you have lowered the board. You don’t want to find its squashed corpse the next time you lift the board Wait a reasonable amount of time and then repeat. That’s all there is to it

The rest of my photos today are animals that we found under the boards. 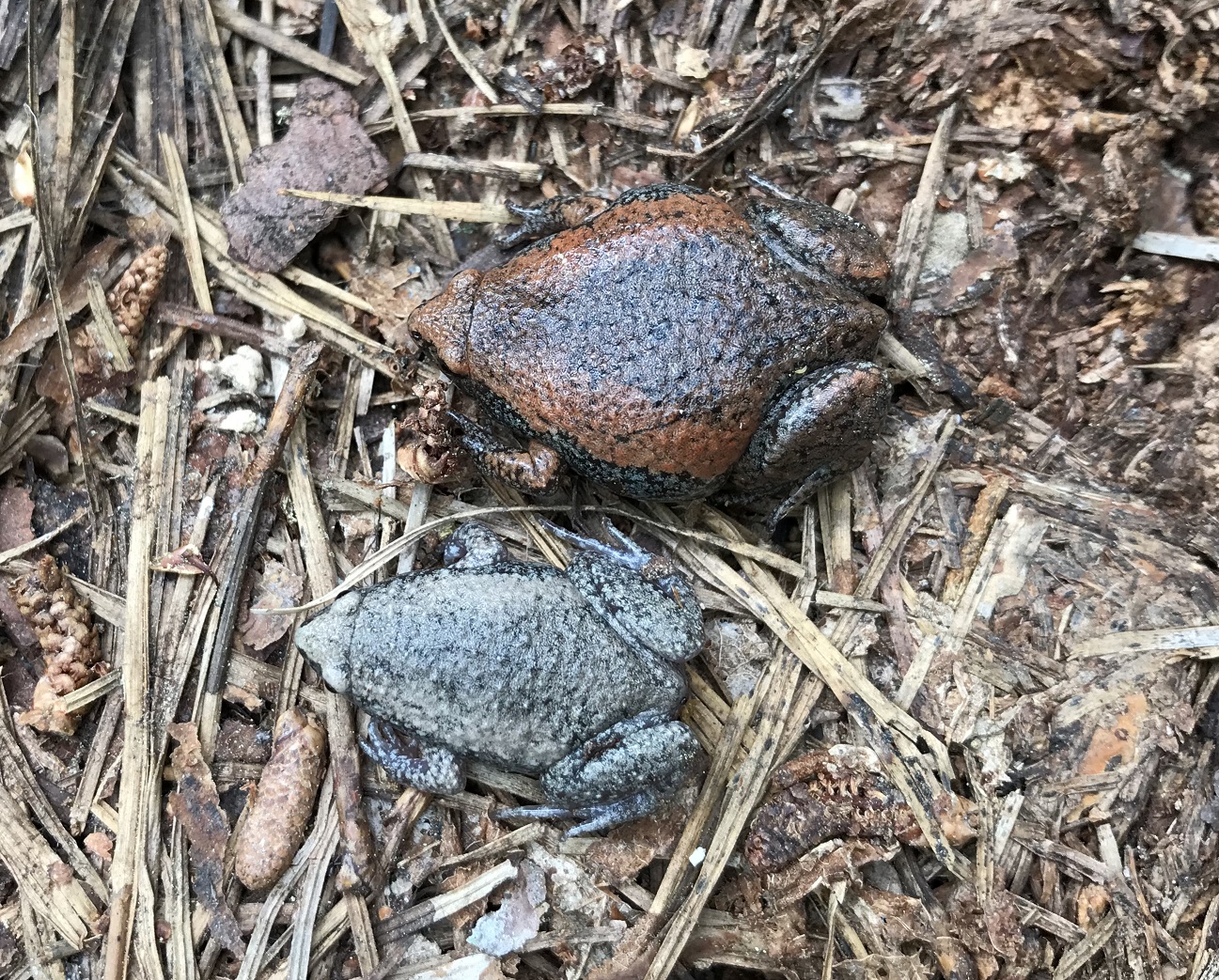 The first time we looked under the boards, we found a pair of eastern narrowmouth toads. These guys spend most of their lives hidden, and I have only seen a handful in the past twenty years. I previously posted about this species here.

I have written about eastern worm snakes here.

5. Another worm snake ready to shed its skin 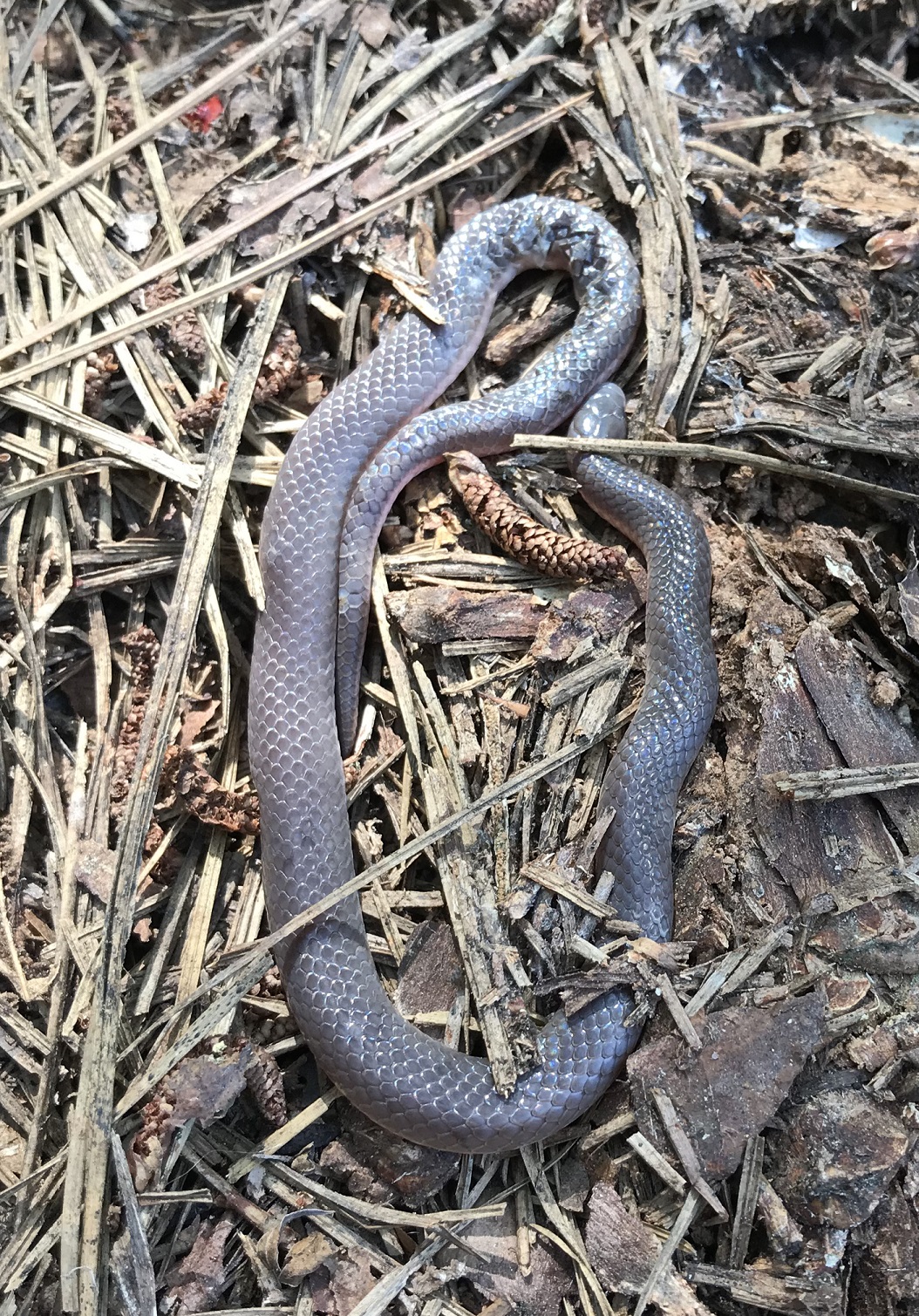 See this old post for more about marbled salamanders.

As always, the Propagator is the host of Six on Saturday.  Head over there to see his Six for this week and find links to the blogs of other participants.

I almost stepped on this pair of copperheads when I went to feed the chickens on Thursday morning. Luckily, they were so focused on each other, they didn’t even flinch when I did a sort of skip-hop over their heads.

Based on their patterns, these are not the same two that my wife found last week. Apparently, our garden is serving as some sort of copperhead love hotel.

My wife thought she had found one very long copperhead when she went out to water her kale seedlings, but it turned out to be an amorous pair. According to Reptiles of North Carolina by Palmer and Braswell (University of North Carolina Press), copperheads have been found mating in April and September, so this seems quite late in the year.

For the past two years, Youngest Offspring has been arguing in favor of backyard chickens, and her long campaign has finally been successful. My garden project this summer was building a coop and run next to my greenhouse, and on September 24, three pullets from a local farm moved in.

Since we have never kept chickens before, it took us a long time to decide exactly what to do about a coop. We considered various prefabricated coops but eventually decided to build our own. I purchased plans for the Basic Coop from TheGardenCoop.com but modified them to make the coop slightly taller and 3′ x 4′ instead of 3′ x 3′. This made the materials somewhat more expensive, but should allow us to keep up to five birds.

The run is about 10’ x 20’, half covered with transparent corrugated polycarbonate and half open to the elements. I built a rough perch from the trunk of a young black tupelo tree (Nyssa sylvatica) and threw in some rotten logs for scratching and grub hunting purposes.

We decided not to allow the chickens free range in the garden, because of the danger from predators. The birds are basically Youngest Offspring’s pets, so we want to protect them as well as we can. Raccoons are probably the biggest threat, but other predators in our area include foxes, coyotes, dogs, cats, skunks, opossums, hawks, and owls. There’s an outside chance of weasels or bobcats, or perhaps a mink following the creek up from the Eno River. Rat snakes probably aren’t a threat to adult chickens, so I’m not worried about excluding them—we’ll just remove any egg raiders we find.

At night, the chickens are confined to the coop, which will hopefully exclude nocturnal predators. For maximum ventilation without sacrificing security, the coop has a ceiling of heavy galvanized hardware cloth topped with corrugated polycarbonate. The large cleanout door and small door connecting to the coop are both secured with swivel hasps. I use carabiners to “lock” the hasps at night, because they’re easier to remove than padlocks but hopefully will be too difficult for dexterous little raccoon paws

The sides of the run are welded wire fence, and the part that doesn’t have a roof is covered with chicken wire to keep out hawks. Around the perimeter, we placed a horizontal apron of the same fencing material. When hidden beneath mulch it will hopefully slow down any dogs or other diurnal predators that try to dig under the fence.

So, fingers crossed. I hope we haven’t set up a buffet with free chicken dinners.


Hähnchen is supposed to be an Ameraucana, but the farm said it is possible she is an “Easter Egger” (Ameraucana hybrid). Pollo is a cuckoo Marans. Kylling is a Red Star. In November they will be joined by a barred Plymouth Rock and an Easter Egger. Youngest Offspring has reserved the names Frango and Kuritsa.

The Propagator is the host of Six on Saturday.  Head over there to see his Six for this week and find links to the blogs of other participants.