I just realized it has been seven weeks since I did a Six on Saturday post.  It’s getting trickier to find six things that I haven’t already talked about, so today I thought I’d showcase plants that I normally wouldn’t mention at all. 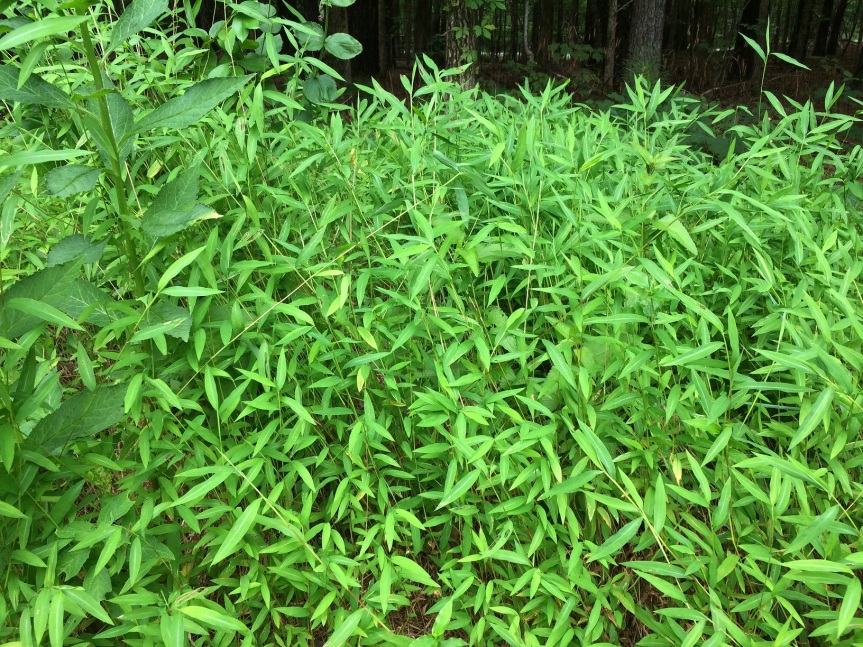 This stuff is the worst.  It’s an annual grass with long, jointed stems that can root at the nodes to spread over flat ground or climb and sprawl to smother plants up to about two feet (70 cm) tall.  Stiltgrass was apparently introduced into the U.S. about 100 years ago, when dry stems were used as packing material for porcelain shipments.   Around here, it can cover large areas of moist open woodland, along creeks and roads, where it completely chokes out native wildflowers.  Seeds can survive several years in the soil, so even very careful weeding appears totally ineffective the next spring.  According to Nancy Goodwin of Montrose Garden, stiltgrass can be eliminated by thoroughly weeding the same area for five or six years without fail.  Mowing has no effect, as shown by the very short stiltgrass that combines with crabgrass to form much of my lawn in late summer.  The busy (or lazy) gardener’s approach that seems to work relatively well is to cover all flowerbeds with a couple of inches of hardwood mulch every few years.  The mulch stops seeds from germinating and enriches the beds, but it must be renewed as it decays, or stiltgrass will return

The berries of this native vine/shrub are important food for birds, so seedlings often sprout around the bird feeder and bird bath, or under trees where birds like to perch.  For small seedlings, I wear disposable nitrile gloves to pull the plant and then peel off the glove to trap the seedling inside.  For larger plants, I use glyphosate–that’s the only time I use glyphosate in the garden.

This native annual vine is, as its name suggests, a member of the Curcubitaceae (gourd family).  The vines are annoying when they form an untidy tangle that smothers tall perennials.  The fruit are apparently edible when green but are very effective laxatives when ripe and black.  Birds and squirrels eat them and distribute the seed throughout my garden.

I think this Asian member of the Moraceae (fig and mulberry family) arrived in my garden via some potted plants from a local botanical garden.  It is an annual in the garden but invades pots in the greenhouse year round.  The foliage of this species closely resembles various members of the mint family (e.g. catnip, lemon balm), but the hairy flower clusters are distinctive.

An Asian species that is now distributed widely in the southeastern U.S., chamber bitter produces many seeds in little capsules along the underside of the stems at leaf axils.  Chamber bitter is a problem mainly in bare soil, such as in my vegetable garden, or where mulch has decayed. 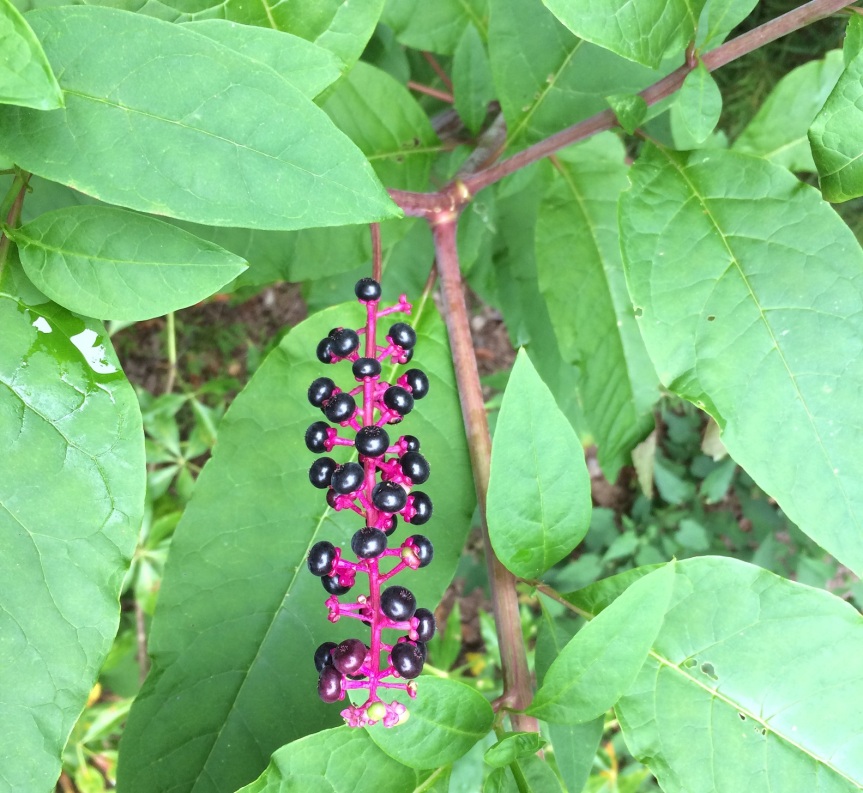 I have heard that this piedmont native is sometimes grown as an ornamental perennial in Europe.  An 8-foot (2 m) tall specimen with shiny leaves, red stems, and dark purple, almost black berries is definitely impressive, but wildlife spread the seeds all over the place.  Even small seedlings have a deep taproot that makes them difficult to completely remove, and like dandelions, they’ll return if you leave the taproot in the soil.

For more Six on Saturday, hopefully including plants that you’d actually like to grow, head over to The Propagator.

“What’s in a name?  That which we call a rose by any other word would smell as sweet.” –William Shakespeare

Once upon a time, there was a small genus of orchids called Schomburgkia whose species grew in the Caribbean islands, Central America, and South America.  Schomburgkia was divided into two subgenera distinguished by pseudobulb morphology:  some species had solid pseudobulbs, while others had hollow pseudobulbs inhabited by ants.  All of the species had smallish flowers clustered at the end of a long inflorescence.

In the 21st century, DNA sequencing has demonstrated that the two groups of Schomburgkia aren’t very closely related to each other [1].  The ant-house species were reclassified into genus Myrmecophila, an old name that previously hadn’t been widely accepted, and the solid-pseudobulb Schomburgkia became part of the genus Laelia.  Bummer.  I kind of liked saying “Schomburgkia.”

This orchid came to me labeled Schomburgkia schultzei, which would make it Laelia schultzei now.  Unfortunately, the flowers don’t match that species.  Based on the photos in volume 3 of Carl Withner’s The Cattleyas and their Relatives, I think it may be Laelia undulata (formerly Schomburgkia undulata), a species native Costa Rica, Colombia, Venezuela, and Trinidad [2].  According to Withner, L. undulata grows in open forest with a pronounced dry season and is found in both lowlands and highlands up to about 975 meters.  As one might expect, based on this habitat, the plant has well developed pseudobulbs and rigid foliage that resists desiccation and sunburn.

I grow my plant in an 8″ square wooden basket, empty except for a couple of chunks of treefern fiber.  I water it about once a week, year round, and hang the basket high in the greenhouse where it gets bright light and dries rapidly.  When it starts to spike, I lower the basket to the bench, because the stiff inflorescence extends a good six feet before producing its cluster of flowers.

After a week of feverish preparation, Hurricane Florence has arrived in North Carolina.  Initial forecasts suggested that the storm would pass right over my garden, but according to the current track, it will follow a wide arc around our area, reserving its full fury for the coastal plain and North Carolina/South Carolina border.  So far, we’ve had nothing more than than some blustery wind and about 2 inches of rain, and the only damage has been a couple of stems of Canna ‘Yellow King Humbert’ that blew over.

Canna ‘Yellow King Humbert’ is one of the more unusual plants in my garden, a genetic oddity that is widely available from commercial nurseries (often under the later synonym, Canna ‘Cleopatra’).  This heirloom Canna was first described in the late 1920s as a sport of Canna ‘Roi Humbert’, a bronze-leaved clone with large red flowers.  The sport was described as having green leaves with yellow flowers spotted with red/orange.

It’s not clear to me if the original Canna ‘Yellow King Humbert’ sport was a chimera, a plant containing cells with two distinct genotypes, but chimerism seems to be its major selling point today.  The plants are a mixture of  cells of ‘Yellow King Humbert’ and cells corresponding to the original ‘Roi Humbert.’  The foliage is split into sectors of green and bronze in varying proportions.

Each bronze leaf sector is connected to the rhizome by a strip of pigmented tissue that has grown from the chimeric meristem.  When the bronze cells extend into the inflorescence, red flowers are produced.  Green cells produce the yellow flowers.  The same inflorescence can produce both red and yellow flowers, or individual flowers can be split between the two colors.

To grow your own chimeric Canna, search for ‘Yellow King Humbert’ or ‘Cleopatra,’ but beware that Canna ‘Cleopatre’ is a completely different clone.  Also be aware that some of the ‘Yellow King Humbert’ for sale seem to be the stabilized yellow form, or a different but similar clone.  Most of the plants sold as Canna ‘Cleopatra’ do seem to be the chimera, but it is probably worth confirming before buying.  The nursery from which I obtained my plant recommends pulling up and discarding any all-green stems to retain the chimeric traits.  I’m not sure if that’s necessary, but it probably wouldn’t hurt.

While we wait to see what impact Hurricane Florence will have in our part of the piedmont, here is an appropriate flower.  Lycoris radiata var. radiata goes by various common names, including surprise lily and red spider lily, but I prefer hurricane lily.  These bulbs consistently bloom about ten days later than my other L. radiata var. radiata, suggesting that they’re a distinct clone.

This week, Lycoris chinensis is blooming for the first time in the garden.  The golden flowers are very similar to those of L. aurea, and both species go by the common name of golden surprise lily.  Don’t mix them up, though, particularly if you live north of the gulf coast.  L. chinensis is one of the species that produce foliage in the spring, and it is reported to be hardy to at least zone 6.  Subtropical L. aurea is the most tender of all Lycoris species.  Its winter foliage will only tolerate a few degrees of frost, and although the bulbs can survive in the piedmont, loss of foliage in freezing temperatures will weaken the plant and prevent flowering.  Unfortunately, L. aurea is commonly available and often sold to unsuspecting customers in inappropriate climates, while L. chinensis can be difficult to obtain.