This week, Six on Saturday is a doubleheader.  In addition to this miscellaneous S.O.S., I also have a post describing six woodland orchids.

The storms last Friday evening (April 19) were a reminder of how local–and how unfair–our weather can be, particularly during the warmer months.  A strong band of storms moved through in the late afternoon, and I was anxious about the possibility of hail and tree-destroying wind.  In the end, we had about half an inch of rain, no hail, and no wind damage. It was a different story just five miles away, where an EF2 tornado touched down.  A member of the local orchid society lives in its path.  He lost many mature hardwood trees, including  a massive hickory that came down on his orchid greenhouse and another that punched a hole in a 1000-gallon propane tank.  With so many old trees down, his woods won’t fully recover in our lifetimes.

I am grateful that I still have a garden to photograph:

Does anyone know how to tell the two species apart? 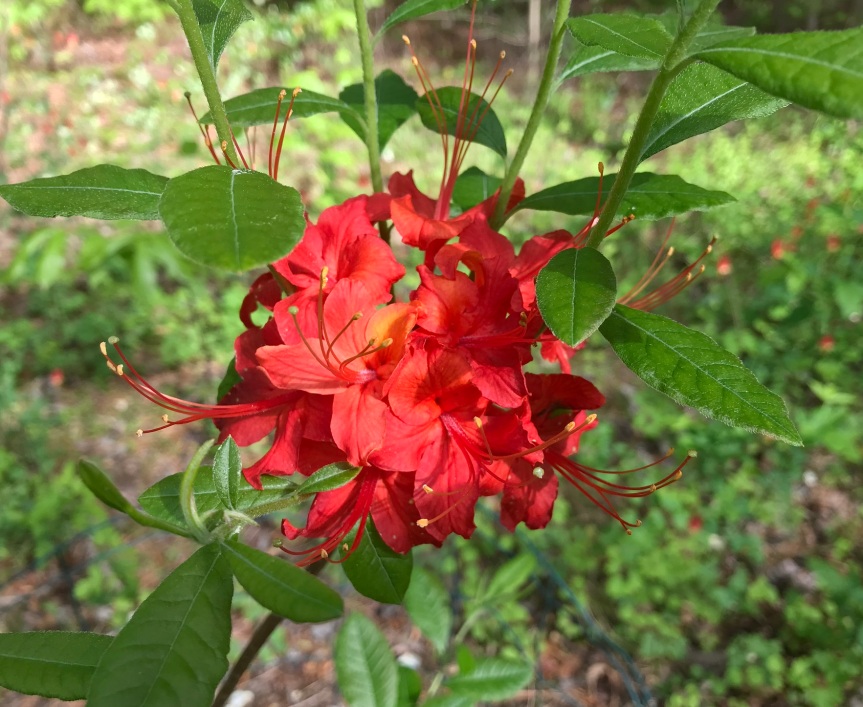 The common name for this species should be flame azalea, but that name gets applied to Rhodonendron calendulaceum instead .  The cultivar name doesn’t lie, though.  R. flammeum is one of those species that nurseries sell as “native,” even though its actual native range consists of a few counties in Georgia and South Carolina, hundreds of miles from North Carolina.

I did a double-take when I saw this bizarre structure.  Somehow, I have never before noticed how odd the leaves of ‘Chinese Dragon’ look before they spread open.

I love everything about this plant and have previously featured it in Six on Saturday #2 and #21.  I am pleased that it has produced a few volunteer seedlings which have inherited the deeply cut foliage. 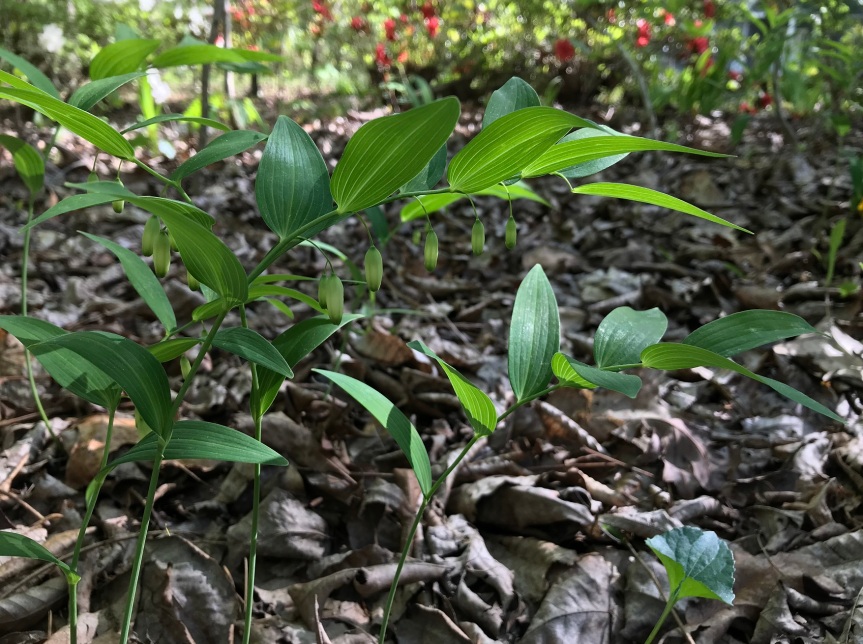 Our little native Solomon’s seal grows wild in scattered locations around our property, usually in dry soil under deciduous trees. The best colonies seem to be under hickory trees. Hickories produce toxic juglone, albeit in smaller quantities than the infamous black walnut, so perhaps the Solomon’s seal have less competition from other plants in those locations. If you are trying to find juglone-resistant plants to grow under a black walnut, Polygonatum species might be worth trying. 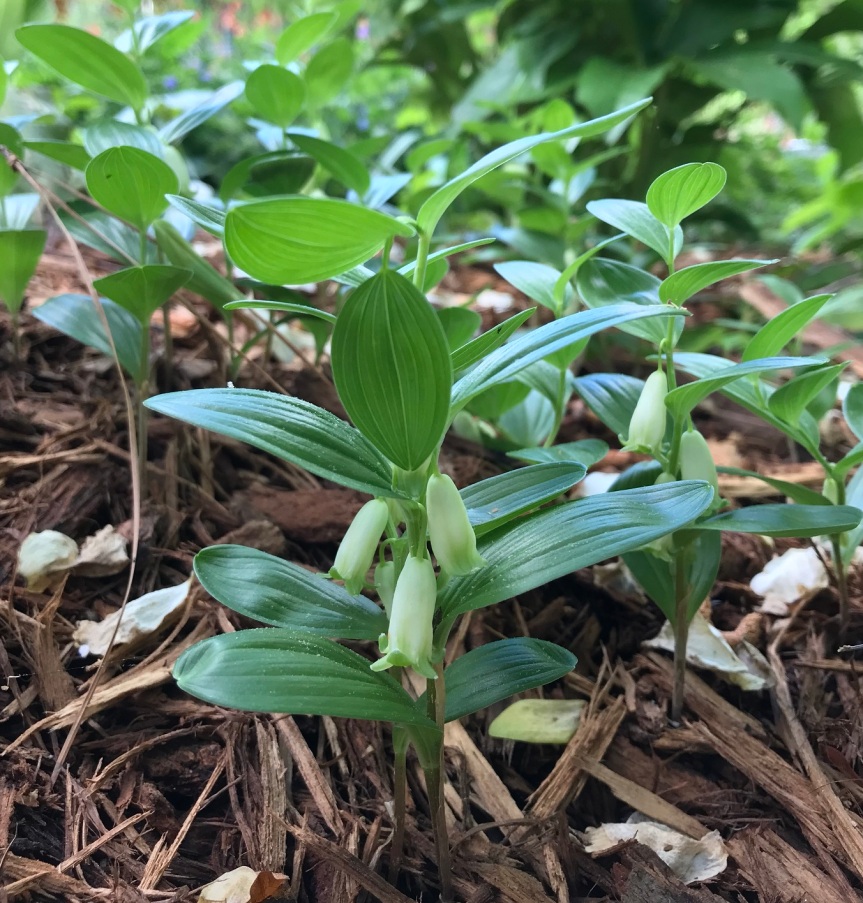 Polygonatum humile, a species from east Asia (China, Korea, Japan) grows well in our climate. These are under a dogwood tree. They stand only 5 inches (13 cm) tall and have none of the arching grace of the larger species. They’re cute, though. 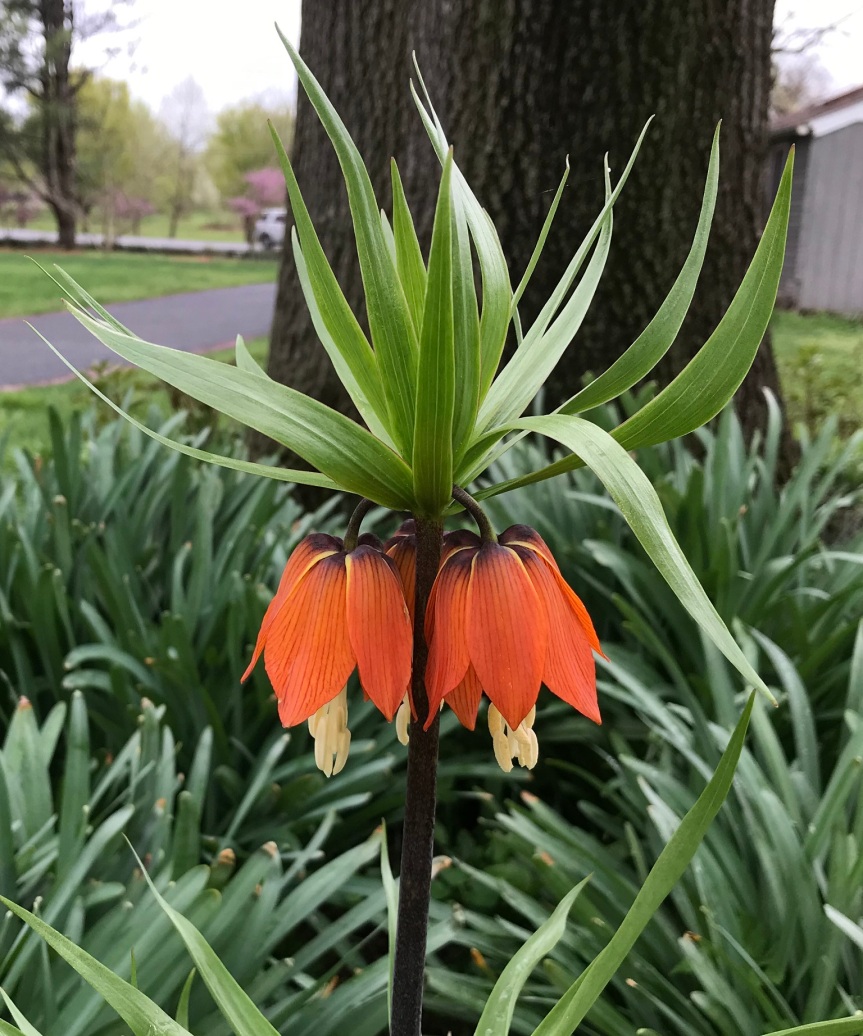 This plant, framed by a huge old patch of Lycoris squamigera, was blooming in my mother-in-law’s garden in Pennsylvania on Easter Sunday.  I have tried growing F. imperialis several times without success.  Occasionally, the bulbs produce some sickly, stunted foliage for a year or two, but they never flower.  Perhaps we have the wrong soil or climate.