Cypella is a genus of the Iridaceae with about 38 species (per Kew) growing in South America.  Despite their subtropical origins, least two of the species are completely hardy here in the North Carolina piedmont.  The smaller of the two, Cypella herbertii, is perfect for the front of a flower bed or a rock garden among miniature plants.  Growing from a small bulb, it stands about 50 cm tall, including the inflorescence, but its form is so light and airy that it never blocks smaller plants. The foliage is surprisingly cold hardy for a plant from Argentina and Uruguay, and it remains green down to around 20 F (-6.5 C).  At colder temperatures, the foliage may die back to the ground, but it soon starts growing again when the weather warms up.  The bulbs have survived 6 F (-14.5 C) in my garden, and I see small seedlings starting to bloom, suggesting that seed and young bulbs can also survive the winter.

My plants start blooming in mid to late spring and continue flowering through much of the summer and autumn.  They sometimes go semi-dormant during very hot and dry weather in July and August but perk up again when the temperature moderates.  Flowers open early in the morning and generally last only one day, but the inflorescences branch and flower successively over several weeks.  Either the plants are self-fertile, or there were several clones in my original pot of bulbs.

Classification of the second species, Cypella coelestis, is a little uncertain.  Kew considers it the only species in the genus Phalocallis, but other resources still classify it as Cypella. I’ll go with Cypella, because that’s the name you are most likely to find on nursery tags.

C. coelestis is larger than C. herbertii in every way.  With the inflorescence, it stands about 150 cm tall and the flowers are at least twice the size of those of C. herbertii. 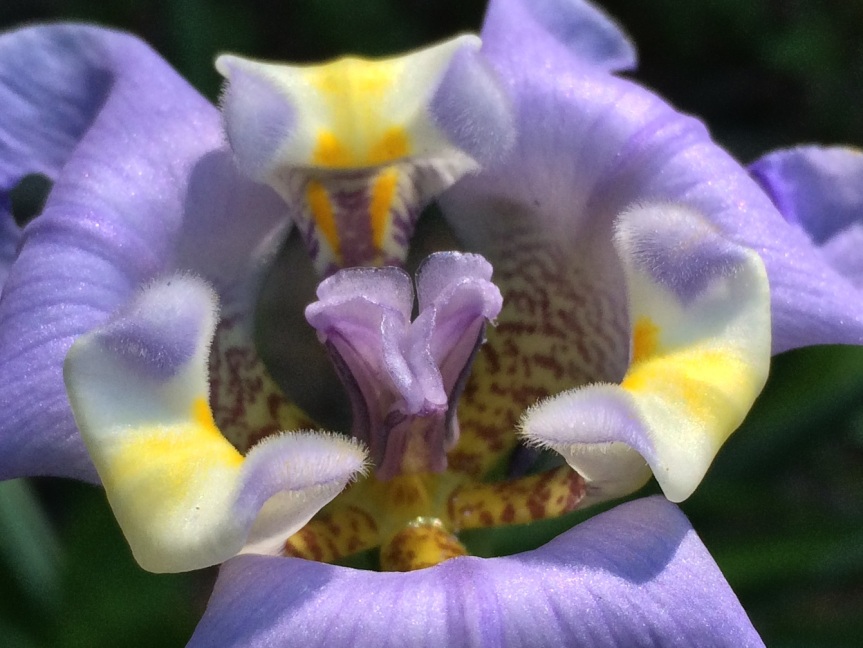 The iris-like foliage of C. coelestis is perhaps slightly less hardy than that of C. herbertii, but its bulbs, which are a very unusual red color, survive the winter just fine.  It has a slightly shorter blooming season, but still flowers through much of June and July.

My C. coelestis plants produce many heavy seed capsules, but I have not yet found any volunteer seedlings.  If the seed is fertile, perhaps winter survival depends on bulbs being buried deeper than self-sown seedlings can manage.  One of these days, I’ll sow some seed in the greenhouse and see what happens.

6 thoughts on “Cypella: South American plants for the piedmont garden”