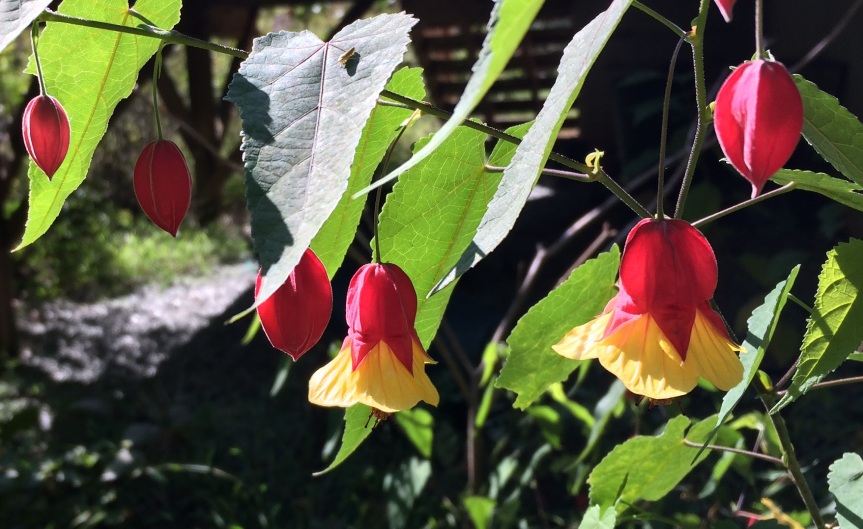 Abutilon megapotamicum is another plant whose presence in my garden is a direct result of a trip to J.C. Raulston Arboretum (see also, Fatsia japonica).  I’m not proud of the fact that I ignored Abutilons for a long time because their common name, flowering maple, was so unappealing.  There’s nothing wrong with maples, but there’s nothing exotic and exciting about them either.  Calling a beautiful subtropical plant “flowering maple” effectively rendered it dull and uninteresting to me.

My opinion was changed by a large A. megapotamicum plant at Raulston.  Hummingbirds and Me:  we all love bell shaped flowers in bright orange-red-yellow, and A. megapotamicum fits the bill.  Here was a gorgeous, tropical-looking shrub whose size strongly suggested that it was winter-hardy, not a recently planted annual.  I decided to try it in my garden, too.

The origins of A. megapotamicum are somewhat mysterious.  Most sources agree that it originates in southern South America–Brazil, Argentina, Uruguay–but I haven’t been able to find any detailed information about its habitat or ecology.  It is widely cultivated for its flowers and widely naturalized in the tropics and subtropics, so perhaps it is one of those species that have been spread so widely by humans that their origins have been obscured.

Apart from the lovely flowers, A. megapotamicum is not a particularly impressive shrub. It has a semi-scandent habit with long, thin, poorly branched stems that have a tendency to use other plants for support.  The flowers are somewhat attractive to hummingbirds, but I haven’t noticed it attracting any insects or other animals.  So, not a particularly good plant for wildlife, but worth including in the garden for its very long flowering period.  My plant blooms from just after the last frost until well into winter, with a short break during the hottest part of summer.  Last winter, I even had a couple of flowers in January during a mild spell.

I planted A. megapotamicum in spring of 2016, so it has only been through one winter so far.  Last winter was mild, but the lowest temperature was about 12 F (-11 C), and we had at least one good snowfall.  The plant showed no damage above 20 F and only partial leaf drop below 20.  I’m hoping that it is well enough established now that it will sprout from the roots if damaged by colder weather in 2017/2018.

My lone clone of A. megapotamicum has not produced any seed, but cuttings seem very easy to root.  I cut several stem tips as insurance last winter, wrapped them in damp paper towels, and stored them in a plastic bag until I had time to pot them up.  When I remembered them a couple of weeks later, they had rooted into the paper towels.